Opener Rachael Haynes cracked a strokeful half century to guide Australia to a three-wicket victory over south Africa in a Group B match of the ICC Women's World Cup here today. 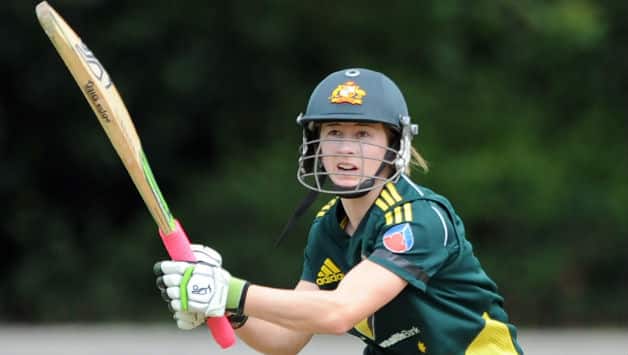 Opener Rachael Haynes cracked a strokeful half century to guide Australia to a three-wicket victory over south Africa in a Group B match of the ICC Women’s World Cup here today.

Haynes scored 83 runs off 108 balls, and her knock was studded with 10 boundaries. She anchored the Australian run chase after South Africa, electing to bat first, posted 188 for nine.

Haynes batted sensibly and starred in two important partnerships, with Lisa Sthalekar and Jodie Fields for the fourth and five wickets respectively, to take Australia to 150 before losing her wicket to Shabnim Ismail in the 37th over.

Ismail came up with a four-wicket haul and was supported well by Susan Benade, who snapped a couple of wickets, but they still could not restrict the Australian eves.

For Australia, Ellyse Perry snapped three wickets, Megan Schutt took a couple, while Erin Osborne, Sthalekar and Haynes accounted for a scalp each.

Chasing 189 to win, Haynes and Meg Lannings made a cautious start scoring 33 in 10 overs, when the latter was sent packing by Benade.

It triggered a mini collapse as the next two batters were back in the pavilion within a span of three balls as Ismail dismissed J Cameron and AJ Blackwell for nought in the 11th over.

Sthalekar (29) then joined Haynes and the two tried to steady the innings before the former was caught by Cri-Zelda Brits off Loubser in the 25th over.

Haynes and Fields then took Australia across the 100-mark with another important partnership before the opener was dismissed.

Osborne then took the onus on herself and, taking the team home even as Australia lost two more wickets in Fields (21) and Sarah Coyte (4).