Sophie Devine celebrated her return to the limited-overs format with a quickfire century as last year's runner-up New Zealand thrashed South Africa by 150 runs in their opening Group 'B' match of the ICC Women's World Cup at Cuttack on Friday. 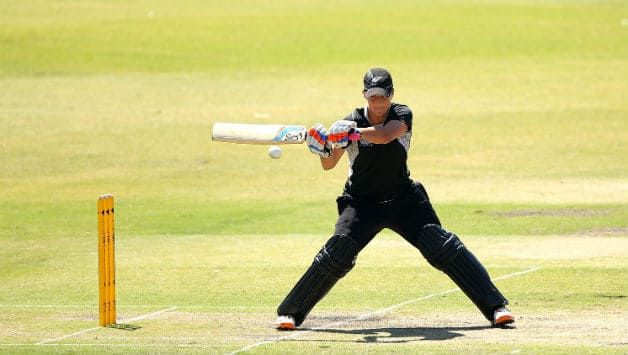 Sophie Devine celebrated her return to the limited-overs format with a quickfire century as last year’s runner-up New Zealand thrashed South Africa by 150 runs in their opening Group ‘B’ match of the ICC Women’s World Cup at Cuttack on Friday.

Devine, making her return after a gap of two-and-a-half years, struck an aggressive 131-ball 145 to help New Zealand post 320 for five after being sent into bat at the DRIEMS Ground, Tangi. This is her maiden century in one dayers.

Defending the total, left-arm pacer Siam Ruck (Four for 31), spinner Morna Nielsen (Three for 34) and Lea Tahuhu (Two for 27) starred with the ball to help Black Caps bundle out the Proteas for 170 runs with nine overs to spare.

Devine, who missed last month’s Rose Bowl series against Australia with injury, decorated her innings with 13 fours and six sixes to surpass her previous best score of 74 against the Aussies.

South African run chase never really got off as they lost wickets at regular intervals. Opener Savanna Cordes was dismissed on the third ball of the innings after she was trapped leg before by Tahuhu for nought.

South Africa then lost other opener Yolandi Potgieter (8) in the sixth over while Marizanne Kapp (10) too did not last long as the Proteas were left reeling at 43 for three.

Skipper Mignon du Preez (29) and Cri-zelda Brits (23) then tried to resurrect the innings with their 24-run stand for the fourth wicket but Nielsen struck twice in successive overs to dismiss both the batswomen.

The left-arm spinner further compounded the misery when she had Chloe Tryon (4) caught behind by wicketkeeper Katie Perkins.

Dane Van Niekerk (1) was caught by Frances Mackay off Tahuhu as South Africa slumped to 82 for seven.

Susan Benade (37) and Shabnim Ismail (31) then combined well and stitched together a 71-run partnership for the eighth wicket to delay the inevitable but the Proteas innings folded up for 170 once the two departed.

Only five South African batswomen managed to get past the double-digit figure.

Earlier, Devine produced a whirlwind knock and together with skipper Suzie Bates (72) shared 128 runs for the third wicket to lay the foundation for New Zealand’s big total.

Devine, who represents New Zealand in cricket and hockey, is also a type 1 diabetic, a condition she was diagnosed with when 15.

The 23-year-old batted till the last over and was dismissed on the final ball of the innings by Ismail. She had come to the crease after the loss of Amy Satterthwaite (4) in the eighth over.

Devine and Bates made best use of the placid track at DRIEMS Ground and put on display their vast repertoire of stroke-play.

Bates 91-ball 72 was laced with eight fours. She was caught by Cordes off Potgieter.

After the loss of Bates, Devine stitched two important partnerships with Sara McGlashan (32) and Nicola Browne (40) to help her team score past 300-run mark.

With McGlashan, she was involved in a 64-run stand while her association with Browne yielded 101 runs.