Underdogs West Indies stunned five-time champions Australia by eight runs in a thrilling low-scoring Super Six stage match to storm into the final of the ICC Women's Cricket World Cup against the same opponents at the MIG Club ground at Mumbai on Wednesday. 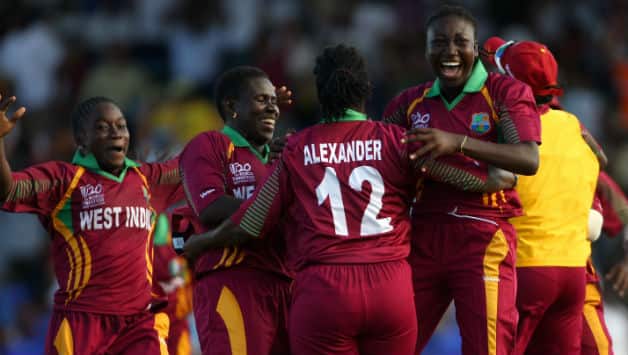 Underdogs West Indies stunned five-time champions Australia by eight runs in a thrilling low-scoring Super Six stage match to storm into the final of the ICC Women’s Cricket World Cup against the same opponents at the MIG Club ground at Mumbai on Wednesday.

Needing to win the match to qualify for the February 17th final at the Brabourne Stadium, the Windies women defended their modest total of 164 with plenty of zeal and pluck to snatch victory with eight balls to spare.

West Indies’ first-ever win over Australia in ODIs also rendered Wednesday’s other Super Six game between defending champions England and New Zealand at the Brabourne into an academic affair as irrespective of whoever wins that game, they will have to fight again for the third place play-off on February 15.

Both Australia, who have already booked their berth ahead of their final league match, and the West Indies secured eight points from four wins in the Super Six stage.

Chasing a modest total of 164 set by West Indies, Australia were inching their way to the target after facing some anxious moments early on after the loss of openers Meg Lanning and Rachael Haynes with only 32 on board, when disaster struck in the form of the dismissal of top scorer Alexandra Blackwell for 45 off 83 balls with four fours.

From 130 for four, Australia slumped to 156 all out in a dramatic collapse following Blackwell’s departure while playing the sweep shot and falling leg before to Stefanie Taylor.

Her wicket, after she had added 41 runs with captain Jodie Fields triggered a slide in which Australia lost six wickets for the addition of 26 runs to slump to their defeat.

The Aussies lost Blackwell, Fields and Julie Hunter for the addition of one run to stare defeat at 131 for 7 and then Renee Chappell at 140.

Erin Osborne kept Australia in the hunt with a defiant 19 but ran out of partners at the other end and then finally departed when she was caught behind trying to scoop left arm bowler Shanel Daley who secured three for 22.

Earlier, the five-time champions bundled out their opponents cheaply after the latter chose to bat first on winning the toss.

Barring the hard-hitting Leandra Dottin who made a breezy 60 of 67 balls with a six and 10 fours, had no answer to combat the skills of the Australian medium-paced attack.

The Caribbean women folded up in 47 overs at the small ground where they made a record 368 for 8 in the preliminary league game against Sri Lanka.

Chasing the none-too-difficult target, Australia were in some early trouble when Meg Lanning and Haynes were sent back by Shane Daley before the 12th over.

Cameron and Blackwell batted well to restore stability to the innings.

Though the former was bowled playing across to Shaquana Quintayne after hitting 5 fours in her 60-ball essay and Sthalekar was run out by a direct hit from mid-wicket, they appeared to be only minor handicaps in Australias pursuit of their fifth successive win the six-team second stage.

But the West Indies had other ideas and completed a glorious and all-important win by fielding brilliantly throughout and effecting three run-outs too at crucial stages.

Apart from Daley, Stefanie Taylor picked up two wickets while Tremayne Smartt and Shaquana Quintayne got one each. PTI SSR KHS