Stephanie Taylor cracked a brilliant century as West Indies crushed Sri Lanka by 209 runs in their second Group A fixture to resurrect their hopes of qualifying in Super Six in the ICC Women's World Cup in Mimbai on Sunday. 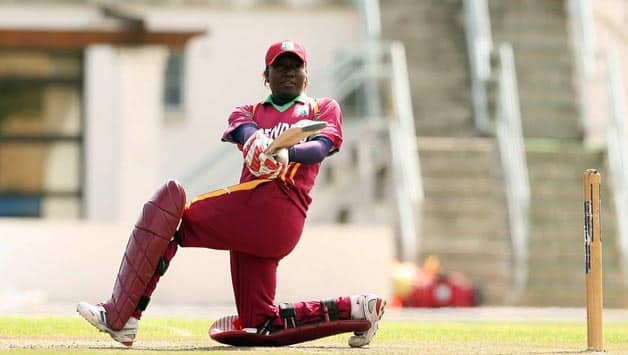 Stephanie Taylor cracked a brilliant century as West Indies crushed Sri Lanka by 209 runs in their second Group A fixture to resurrect their hopes of qualifying in Super Six in the ICC Women’s World Cup in Mimbai on Sunday.

Having lost to India by 105 runs in their lung opener, West Indies needed a victory to stay alive in the tournament.

The Caribbean islanders did it in style by rattling up their highest-ever ODI total of 368 for eight by riding on 21-year-old opener Stephanie Taylor’s career-best knock of 171 and then bowled out Sri Lanka for 159 in 40 overs at the MIG Club ground.

Jamaican Taylor cracked her fourth one-day century and the hard-hitting Deandra Dottin smashed the fastest-ever half century in women’s cricket in only 20 balls to power the West Indies to their first-ever 300-plus score and the fourth highest in the tournament’s history and the seventh best of all ODI scores.

Sri Lanka, who had stunned defending champions England with a thrilling last-ball win in their tournament opener at the Brabourne Stadium two days ago, never threatened to surpass the target and lost comprehensively.

The West Indians bowled with purpose and also fielded brilliantly, in total contrast to the dismal show put up by their rivals, to emerge deserving winners.

Both teams are level on two points from two games in the four-team group which has opened up.

Sri Lanka never recovered from their dismal start that saw them losing their openers Charmari Athapaththu and Yasoda Mendis with only 29 on the board.

They then slumped to 89 for six before finally collapsing for the modest score, with only Prasadini Weerakkody crossing 20 among top six batswomen by making 22.

Deepika Rasangika, at number seven, top-scored with 28 before being brilliantly caught by Shemaine Campbelle off Shaqana Quintayne.

Shanel Daley, with figures of two for 19 in her first spell of six overs and two for 35 overall was the pick of the bowlers initially and then spinner Quintayne sliced through the middle for excellent figures of three for 32.

Earlier, Taylor, who flopped against hosts India at the Brabourne Stadium on January 31, struck form in great style to notch a personal best score off just 137 balls with 18 fours and two sixes, as the Caribbean islanders toyed with the Lankans’ bowling attack to run up their highest-ever ODI total after being put in to bat.

This the first time the women from the Caribbean islands have crossed the 300-run mark in ODIs.

Taylor, driving in front of the wicket with power and panache, first put on 62 runs for the first wicket with left-handed Lycia Knight, who made 30, and then got involved in a fine partnership of 110 runs in 124 balls for the third wicket with Kyshona Knight who was run out for 44.

Later, the innings was given a fresh impetus by the arrival of Deandra Dottin who struck four sixes and five fours in a whirlwind knock of 50 off just 20 balls, three balls faster than the previous fastest made by Australia’s Meg Lanning less than two months ago in Sydney.

The 21-year-old Barbadian also featured in a quickfire partnership of 90 off 39 balls with Taylor for the fourth wicket, by taking full advantage of the field restrictions to hit past the ropes with impunity

Dottin, who started off with a straight six, completed her 50 off just 20 balls with four fours and five sixes and then got out two balls later, bowled by left-arm spinner Sherina Ravikumar.

The West Indies, thanks in the main to the belligerent knock by Dottin, added as many as 71 runs in the second power play period taken between the 36th and 40th overs and were handsomely placed at 274 for 4.

Later, captain Merissa Aguillera compiled a 24-ball unbeaten 47 and also added 55 runs in less than six overs in the slog overs for the seventh wicket to pile on the agony on Lanka who conceded 89 runs in the last 10 overs.

Stefanie completed her ton in 97 balls and then sat back a bit when Dottin went berserk as the bowling and fielding of Lanka wilted.

Dottin, who started her innings with a straight six off Lanka’s new ball bowler Kaushalya Lokusooriya, smashed 17 runs in one over off Chamani Senevirathne and then carted Sripali for two sixes in an over, including one out of the small ground, to complete her half ton.

After Dottin was bowled by left-arm spinner Sherina Ravikumar, Taylor continued to plunder the pedestrian Sri Lanka bowling attack, though she lost two more partners at the other end in quick time, to help West Indies reach 300 in the 44th over.

Taylor’s previous best of 147 had come against the Netherlands at Potchefstroom, South Africa, in October 2010.

Her other centuries were made against South Africa and Ireland.

IPL 2013 Auction: A day of surprises at Chennai