Where Pakistan surprised the top teams in ICC Champions Trophy 2017 like England, South Africa and India, their women counterpart skipper Sana Mir expects the same from her side.

Where Pakistan surprised the top teams in ICC Champions Trophy 2017 like England, South Africa and India, their women counterpart skipper Sana Mir expects the same from her side. Pakistan sprung as champions being the lowest ranked side. Sana s side is sailing in the same boat. Pakistan had a mixed outing in the warm-ups where they comfortably won against West Indies by 5 wickets, courtesy Bismah Maroof and Nain Abidi s 141-run stand. Sana also played a crucial role in the win with her figures of 2 for 46. Sana wants her side to continue the wave set by the men s team and set history by clinching the World Cup for the first time. ICC Women s World Cup 2017: This Pakistan side is a much-improved unit

Speaking to ICC, Sana explained how her team learnt about the men s team winning the final, During the Pakistan innings (in the final) we were practising at Grace Road, and then before lunch we saw the last 10 overs of the Pakistan batting and we were super excited about the way they played. Then we watched the whole second innings and the bowling performance, it s wonderful to see the men doing so well. The support this time is huge and people are following women s cricket back home so if we can cause a couple of upsets in our campaign and improve our ranking, it would be great news for our cricket and for Pakistanis.

Sana who has captained Pakistan since 2009, looks to bring her experience and is hopeful to cope with the pressure, It s more of a mental thing now, it s about nerves and keeping your cool under pressure. It s been pretty good preparation so far. We ve been here since 2nd June and we ve played some practice matches and the quality of cricket we have played is improving every day so I m very happy with the way the team is progressing.

We haven t played a semi-final of a big tournament as yet so that would be an amazing thing to achieve at this point.I think the strength in the bowling line-up is quite good and the batting is catching up a bit. Now it s a balance between the two. The day we pull it off in both departments, that is when we can upset any team, she concluded. 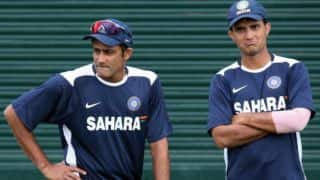