ICC Women's World Cup: Indian bowlers dominated the proceedings as West Indies could only manage 183 for 8 after being put into bat.

In match 7 of ICC Women’s World Cup 2017, India women thrashed West Indies by 7 wickets to notch up their second win of the tournament. After edging past England in their tournament-opener, India carried on from where they left and emerged victorious courtesy disciplined bowling and maiden World Cup century (second overall) from Smriti Mandhana. In pursuit of 184, India lost quick wickets but a steady 108-run stand between Mithali Raj-Smriti resurrected the innings. Smriti’s innings compiled of 13 fours and 2 sixes and she responded to the hard-work put in by the bowlers.

India were 33 for 2 inside 8 overs in chase of 184. It looked like West Indies were in for a fight and India would stutter, but Mandhana ensured no further hiccups. Her innings comprised of few scratchy shots, but she dealt in boundaries to keep the scoreboard ticking. She lashed onto the short balls and creamed some lovely drives and cuts to steer her side home. Poonam Raut and Deepti Sharma’s no show with the willow did not deter Mandhana’s approach and she marched forward with aggressive intent. Mithali lend good support by buying time and seeing off a crucial phase with the youngster. The skipper’s dismissal, at 46, prevented her from scoring her 8th consecutive fifty, but India won by virtue of an unbeaten 45-run stand between Smriti and Mona Meshram. Harmanpreet did not come out to bat after she picked up an injury while fielding.

Earlier, being put into bat, West Indies managed only 183 for 8. Their openers, Hayley Matthews and Felicia Walters, played out the early overs of Jhulan Goswami and Shikha Pandey without throwing their scalps. Nonetheless, Ekta Bisht’s inclusion to the attack changed the complexion of the game. She removed Felicia off her very first delivery and maintained a tight grip on the scoreboard courtesy disciplined straight bowling.

Donning the national jersey for the 100th time in ODIs, Stafanie Taylor stitched a brief stand with Hayley for the second wicket. The latter was going strong against the pacers which prompted Mithali to bring on the spinners. The move paid rich dividends instantly. Deepti Sharma got rid of the opener on a simple return catch. Hayley perished for 46, which triggered a collapse. Stafanie was involved in a mix-up; leading to her downfall for 16. No other batswomen stood the test of time against the Indian bowlers from thereon.

Poonam Yadav struck with two vital blows, in form of Deandra Dottin and Merissa Aguilleira, and troubled the opposition with extra flight and adequate turn. The rest of the batting folded in front of Harmanpreet Kaur’s part-time off breaks. She also chipped in with two wickets but suffered a finger dislocation on the field. Handy knocks from Shanel Daley and Afy Fletcher propelled West Indies to 183 for 8 and allowed them to play their full quota of overs. Afy was given an early reprieve by Ekta and she made the most of it with an unbeaten 36.

In the end, the total proved to be a paltry one in front of Indian eves’ heavy batting line-up. With this victory, they remain unbeaten in the competition and will next face arch-rivals Pakistan on Sunday.

Player of the Match: Smriti Mandhana 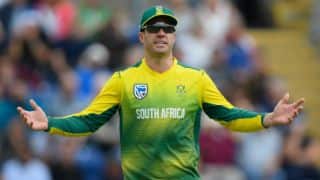