The contest between Australia Women and South Africa Women will be played at Vidarbha Cricket Association stadium, Nagpur.

Australia Women will square off with South Africa Women in their first Group A games of ICC Women’s World T20 2016 at the Vidarbha Cricket Association stadium, Nagpur. While the defending champions Australia will be give their best to start off the World T20 campaign on a winning note, the emerging South Africans will leave no stone upturned to give a tough fight to the Australians. We’ll bring you all the action between these two mighty teams with live scores, cricket streaming and latest match updates as soon as the contest gets under way. South Africa will be Skippered by Mignon du Preez. Live Cricket Scorecard: Australia Women vs South Africa Women, Match 6, Group A

Australia have not been at their best in the shortest format, off late. Since January, they lost 4 out of the last 6 T20Is Down Under against India and New Zealand. However, captain Meg Lanning’s women displayed a remarkable performance against the West Indies Women in a warm-up match, winning by 43 runs. Though the results in January may not have gone Australia’s way, warm-up contest was an ideal preparation for them. On the other hand, South Africa defeated West Indies in a T20I series at home and are brimming with confidence. If we go by Nagpur track that hosted men’s opener between India and New Zealand, both teams will prefer more spinners than pacers in the squad. 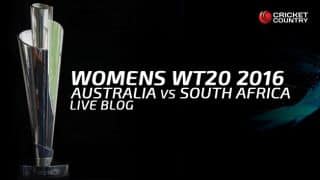