Overs 20: A wicket off the final delivery for Radha Yadav as Hayley Jensen is stumped for 1. With that, New Zealand finish on 160/9 as India record a 34-run win.

Overs 19.5: OUT! Deepti Sharma pulls off another tough catch. This time, running in, she dives forward to take a low catch and ends Leigh Kasperek’s innings on 19. Score 160/8

Overs 19: Leigh Kasperek ends the over with her second boundary to take New Zealand to 151/7

Overs 16: Consecutive fours to Katey Martin – to backward and deep square leg regions. Eight runs from the over. New Zealand need much more than. Score 119/6, chasing 195

Overs 14.5: OUT! This is turning out to be a memorable debut with the ball for Hemalatha. She has now picked up her third wicket  in Maddy Green who departs after a brilliant catch from Deepti Sharma. She scored 2. Score 110/6, chasing 195

Overs 13.4: OUT! That’s a big wicket for India. Chase over for New Zealand? Suzie Bates was waging a lone battle amidst the slide but she also falls after being caught off Arundhati Reddy for 67 off 50. Score 98/5, chasing 195

Overs 12.4: OUT! India keep chipping away at the wickets. Hemalatha returns to get rid of New Zealand captain Amy Satterthwaite who sweeps but gets a top-edge to be caught by Veda Krishnamurthy at square leg for 3. Score 93/4

Overs 10.5: FIFTY for Suzie Bates! Her sixth such score in the format and she reaches there with a four off Deepti Sharma. With that, she has also become the leading run-scorer in Women’s T20Is

Overs 10: Amy Satterwaite survived the hat-trick delivery leaving aside a delivery well outside off. Two wickets and four runs in the over. Score 74/3

Overs 9.4: OUT! Poonam is on a hat-trick now. Jess Watkins walks forward, goes for a sweep but misses the delivery and wicketkeeper Bhatia does the rest. She returns after a first-ball duck. Score 73/3, chasing 195

Overs 9.3: OUT! Poonam Yadav gets India their second breakthrough. A simple catch from Devine to Harmanpreet at extra cover as she walks back for 9 off 9. Score 73/2

Overs 9: Hemalatha continues. And a mix-up between the two NZ batters with Devine sent back, Quick work from Bhatia as she takes off the bails. TV umpire asked for help but Devine is comfortably in. Devine then pulls the penultimate delivery of the over for the first six of NZ innings. Nine runs from the over. Score 70/1, chasing 195

Overs 8: Another spinner into the attack now. Poonam Yadav to bowl her first over and Batles smacks the fourth delivery of the over to backward square leg region for a four. Seven runs from the over. Score 61/1

Overs 7: End of a productive over for India – a wicket and just three runs from Hemalatha’s maiden T20I over. Score 54/1, chasing 195

Overs 6.3: OUT! Dayalan Hemalatha picks up her maiden T20I wicket in very first over. Peterson was looking to steer this to third man region but instead managed an edge and wicketkeeper Taniya Bhatia took a completed a good catch. Peterson scored 14 off 12. Score 52/1

Overs 6: FIFTY up for New Zealand. This is a solid start from New Zealand unlike India who had lost three wickets inside the Powerplay. The opening pair of Bates and Peterson has added 51 runs. Score 51/0, chasing 195

Overs 4: Suzie Bates is in some mood today. She clatters two fours in the second over of Radha Yadav. 11 runs from the over. Score 33/0, chasing 195

Overs 3: Spin from both the ends now. Right-arm off-break into the attack now. Bates manages to score a four in an otherwise decent over. Nine runs from it. Score 22/0

Overs 2: Left-arm spinner Radha Yadav starts from the other end. Good over for India. Just two runs in it. Score 13/0

Over 1: A four each to Bates and Peterson from the first over as New Zealand are off to a flier. 11 runs from the over. Score 11/0

Suzie Bates and Anna Peterson will kickstart New Zealand’s chase of 195. Arundhati Reddy will start the proceedings for India

Overs 19.5: OUT! End of a sensational innings from Harmanpreet as she is caught by Katey Martin off Devine. She scored 103 off 51 with seven fours and eight sixes in it.

Overs 19.3: HUNDRED for Harmanpreet Kaur! This has been one memorable knock from the India captain. She reaches the landmark with a couple. This is her maiden hundred in T20Is.

Overs 19: Harmanpreet Kaur sprints to 97* off 47 with back-to-back sixes off Jess Watkins. What an innings this has been so far from the India captain. Score 187/4

Overs 18.2: OUT! Tossed up and Jemimah Rodrigues charges forward but misses the delivery and the wicketkeeper Katey Martin does the rest. Rodrigues stumped for 59 off Jess Watkin. Score 174/4

Overs 18: Harmanpreet Kaur continues to lead assault. Amelia Kerr ends up being creamed for 17 runs in her final over of the innings. Rodrigues struck a four off the first delivery to start the proceedings. Harmanpreet rounded off belting a full toss for her seventh four and finishing the over with her sixth six. Score 172/3

Overs 17: Another big over for India. 17 runs from it. Rodrigues began the over with a four to midwicket region. Harmanpreet then added two more fours to her total – the first to fine leg followed by another one to backward square leg. Score 155/3

Overs 16.2: FIFTY for Jemimah Rodrigues. Reaches the landmark with a couple off Jensen.

Overs 16: Harmanpreet is unstoppable today.  She continues to punish NZ bowlers. This time the victim is Kasperek who has been hit for a four and a six off consecutive deliveries. Score 140/3

Overs 14.3: FIFTY for Harmanpreet Kaur off 33 deliveries. She is leading by example.

Overs 14: A big over for India as captain Harmanpreet takes the score past the 100-run mark. She struck two sixes, first over long-on and the second over long-off, and a four to make it 18 runs from the over. Score 116/3

Overs 13: Another good over for India. Rodrigues collects her fifth four. Seven runs from the over. India 98/3

Overs 12: Tahuhu proves expensive in her third over with Rodrigues and Harmanpreet picking up a four each. 10 runs from the over take India to 91/3

Overs 11: Leigh Kaspererk returns to the attack and allows just five runs in the over. Harmanpreet went down holding her tummy. She looked in some discomfort. Team physio rushed onto the field to attend her. Score 81/3

Overs 10: Harmanpreet Kaur has laid down the marker with two big hits in the second over of Jess Watkin. Harmanpreet charged forward and deposited a full toss over midwicket boundary for the first six of the tournament. Then she finished the over with another maximum, this time over long-off. Score 76/3

Overs 9: Amelia Kerr continues and Jemimah Rodrigues starts another over with a four, this time smashing a full toss through covers for her third four. Eight runs from the over. Score 60/3

Overs 8: FIFTY up for India. Sophie Devine comes in to bowl her first over and Rodrigues welcomes her with a four, although via an inside edge to fine leg. Seven runs from the over. Score 52/3

Overs 7: Amelia Kerr, right-arm leg-break to bowl her first over. Two singles and a double in the over. Score 45/3

Overs 6: Harmanpreet Kaur is the new batter. India have scored 41/3

Overs 5.4:  OUT! That’s a soft-soft dismissal. A full toss from Leigh Kasperek and Dayalan Hemalathan, making her T20I debut, ends up handing a simple catch to Tahuhu. She scored 15 off 7. Score 40/3

Overs 5: Hayley Jensen into the attack now. Back-to-back fours in the over, both to Dayalan Hemalatha. The first one via pull and the second a drive through covers. Score 37/2

Overs 4: Seven runs and the big wicket of Mandhana in the second over of Tahuhu. Score 24/2

Overs 3.4: OUT! A stunning catch from Hayley Jensen to dismiss Mandhana on 2. Short delivery from Tahuhu and Mandhana pulls it in front of square leg where Jensen leapt high to complete a brilliant catch. Score 22/2.

Overs 3: Right-arm off-break Leigh Kasperek into the attack now. Just three runs from the over and there was a loud lbw appeal from Kasperek against Mandhana. New Zealand do not opt to review the not out decision but the ball-tracker showed that hit the pad first and would have crashed on the stumps. Score 17/1

Overs 2: End of a successful over from Tahuhu. Just five runs from it plus a wicket. Jemimah Rodrigues is the new batter.

Overs 1.1: OUT! And Taniya Bhatia has been bowled for 9 by Lea Tahuhu. The India batter has been beaten by the pace as the ball crashes on the stumps after being deflected off the pad. She scored 9. Score 9/1

Over 1: Bhatia has started the India innings in blazing fashion, hitting the very first delivery of the tournament for a four. She added another boundary against her name with Watkin leaking nine runs in her first over. Score 9/0

#Jess Watkin will open the attack for New Zealand. Smriti Mandhana and Taniya Bhatia are the two India openers

Time for the national anthems!

Hello and welcome to our live coverage from the ICC Women’s World T20 2018! In the tournament opener, India will face New Zealand at the Providence Stadium in Guyana today.

India Women will expect no less than the semi-finals spot in the Caribbean, having reached the final of last year’s 50-over World Cup in England and with a 12-6 record in T20Is this year. Harmanpreet Kaur’s team – with an average age of 24 – begin their World T20 campaign against New Zealand with a cracking match, pitting talent and experience on both sides together. Harmanpreet has hailed her vice-captain and opener Smriti Mandhana as the game-changer, and with Mithali Raj, Jemimah Rodrigues, Ekta Bisht, Deepti Sharma and Poonam Yadav in the ranks, indeed India Women are the team to beat. India are pooled with three-time winners Australia, New Zealand, Pakistan and Ireland at the World T20, and will be aware of what needs to be done. Click here to read more 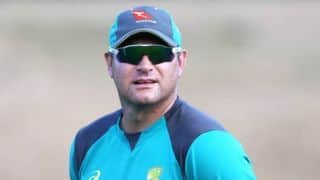