Smriti Mandhana hit a career-best 83 to help India post a challenging 167/8 in their final Group B match of the 2018 ICC Women’s World T20 against Australia in Guyana on Saturday. Mandhana struck nine fours and three sixes for her first half-century of the tournament.

Ellyse Perry, playing in her 100th T20I, was the pick of the Australian bowlers finishing with 3/16 from three overs. Ashleigh Gardner and Delissa Kimmince chipped in with two wickets each.

It was Mandhana who dominated the India batting after their captain Harmanpreet Kaur opted to bat first at the Guyana Stadium.

Garnder struck early as she removed opener Taniya Bhatia in the second over.

Megan Schutt removed Mandhana off the first delivery of the penultimate over to end her innings. However, there was some bad news for Australia as a nasty collision with Schutt saw wicketkeeper Alyssa Healy leaving the field. Beth Mooney replaced her behind the stumps. Perry then took two wickets in the final over with India managing just 13 runs off the final two overs. 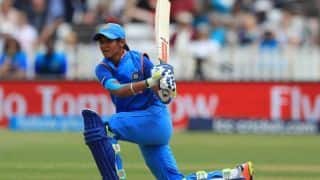