Alyssa Healy suffered a nasty blow to her head that left her with mild concussion after she clashed with teammate Megan Schutt during a group B match of the ICC Women’s World T20 against India.

Both the Australians went for a catch from Arundhati Reddy but collided midway through the pitch that saw Healy leaving the field. She was later told to have mild concussion ending her further participation in the fixture.

Australia went on to lose against India. However, it was a dead rubber with both the teams already having qualified for the semifinals.

Thanks to everyone for their overwhelming wishes! Got a run in this morning and feeling really good. Fingers crossed it’s keeps getting better.
I have been told the black eye makes me look tough so I’m rolling with it!! #yieww

Healy took to her Twitter account on Tuesday posting an update on her recovery saying she is feeling ‘really good’ but has her ‘fingers crossed’.

“Thanks to everyone for their overwhelming wishes! Got a run in this morning and feeling really good. Fingers crossed it’s keeps getting better,” she wrote.

Healy has been vital to Australia’s chances at the ongoing WWT20 where they now face hosts and defending champions West Indies in the last-four. She was the player-of-the-match in the first three group B matches, registering scores pf 48, 56* and 53 against Pakistan, New Zealand and Ireland.

While Australia face West Indies, India will lock horns with England – a team they lost to in a dramatic final of the ICC Women’s World Cup in 2017. 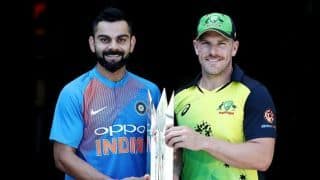