Things started well for Canada as they were 48 for the loss of no wicket after the first Powerplay.

In a do or die match between Nepal and Canada in the ICC World Cricket League Division 2 Nepal decided to field first. Things started well for Canada as they were 48 for the loss of no wicket after the first Powerplay. The Nepali seamers Karan KC and Sompal Kami who started the bowling didn’t seem to trouble the openers much. Canada, however managed to score 194 in 50 overs.

It was in the 11th over when left arm orthodox spinner Basant Regmi was introduced and he got the wicket of Ravindu Gunasekera on the second ball itself. It was all spinners game after that point.

If Nepal and Canada were big names in cricket then a meme saying ‘Nepal were prepared for Gunasekera and Nitish Kumar but Srimantha Wijeratne came out of the syllabus’ would have been viral on social media. Gunasekera and Nitish are the top run scorer of the tournament with scores 216 and 186 respectively. (No, this is not Sri Lankan team)

Wijeratne out of nowhere, recorded the highest score in the league but also registered his maiden century in a vital match. His innings of 103* came off 152 balls which included 8 boundaries.

Not enough turn for Nepal

The spinners did it again for Nepal picking up 6 wickets of the eight. Regmi was the star performer with figures 3 for 34. However, the spinners could not turn the fortunes for Nepal as they failed to pick up the main wicket of Wijeratne. Sandeep Lamichhane the top wicket-taker bowler in the tournament with 16 wickets to his name also gave away runs. There were three sixes in the entire match all hit on Lamichhane’s bowling.

No one other than Wijeratne looked comfortable against Nepal’s bowling attack. He also carried his bat through the innings.

Nepal in the first match edge past Namibia by a narrow margin chasing a low score. Canada have more chances of booking a place in the final with this competitive score. 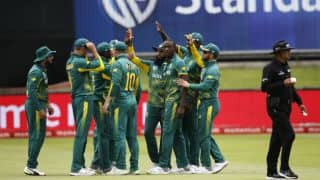