Hong Kong capped their maiden ICC World Cricket League Championship campaign with a major exclamation point, hammering Papua New Guinea by 93 runs to finish third on the ladder. Anshuman Rath and Babar Hayat – as has been the case a number of times throughout the WCLC – starred with a 142-run partnership that formed the basis of Hong Kong s mammoth total of 323-4. Although a maiden One Day International century again narrowly avoided Hayat, who fell for 89, Rath batted all 50 overs in registering an unbeaten 143 off 137 balls – his second ton in the WCLC campaign.

Rath, who only recently turned 20, finished as the leading run-scorer in the league with 678 runs at an average of 75.33. From the time Hayat was dismissed for an innings that came off just 80 balls and included 5 sixes, Hong Kong launched 98 runs off the last eight overs – atoning for Wednesday’s encounter where PNG restricted HK to just 60 from the last 10. In reply, PNG lost early wickets for the second game in a row, falling to 20-3 in the first 6 overs. Nadeem Ahmed again caused problems, taking 2-36 from his 9 overs to finish as the tournament s equal leading wicket taker with 24.

PNG did recover from 90-6 to post 229 but the result was always firmly in control for Hong Kong. Although Scotland s win over Kenya meant Hong Kong could only move up one place into third on the ladder, coach Simon Cook was delighted with the consistency and development his side showed over the two and half year league. He said;

“It was a very good sign of where we are – we posted 300 plus in three games which shows we are getting more consistent in our batting areas, although I thought we left a few runs out there but that score was always going to be tough to chase. Our bowlers stood up again and were counted taking three wickets early.

“Very happy with the finishing position – we targeted second but the margins were very small and we were only a few runs away from winning it. It s a very encouraging time – if you look at the other Associates around us now their age is a lot older than us so it s a very exciting time for Hong Kong cricket.”

Captain Babar Hayat said: “Very happy with the way we finished – we could have won this league with the way we lost against the Netherlands. The way we trained and prepared we were right up for it and everything came together. We didn t know when we started how we would go but after five or six games we realised that we were good enough to contend and at least finish in the top four.”

“The way Anshy has developed in the World Cricket League has been incredible. The way he played today was amazing he just rotated the strike and then lifted the rate at the end. It was great to watch.” 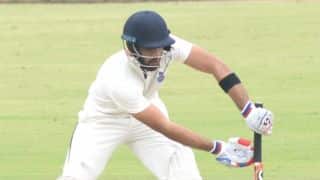