Jos Buttler believes that the tri-series final will be a dress rehearsal ahead of World Cup.

Perth: England wicketkeeper-batsman Jos Buttler is pleased with the way his team has shaped up for the World Cup after beating India twice in the tri-series but said they are desperate to test their skills against a much-fancied Australia in the finals on February 1.

England had thrashed India by nine wickets in Brisbane, before notching up a comfortable three-wicket win at WACA on January 30 to make it to the finals. “It’s gone pretty well. I think we’ve developed a lot the last few months, throughout the Sri Lanka series and now under Eoin Morgan‘s captaincy in Australia. I think we can be pleased in the direction we’re going,” said Buttler.

“We seem to have a settled side for Australian conditions and a couple of wins against a strong India side can give us a lot of confidence going into the World Cup. I think the performances we put in have been good. In Hobart we got close, we should have got more runs and put more pressure on them but Australia bowled pretty well at the end. But it was a tight game so we’ve been getting closer and hopefully tomorrow will be third time lucky,” he added.

This clash will be a proper dress-rehearsal for England and Australia as the two sides will clash again in their opening World Cup encounter on February 14 in Melbourne.

“Things change very quickly. If we win people will say we’re going in the right direction and maybe we could cause a few upsets. If we lose we’ll be the same old England. That’s always the way it is. Looking ahead, if we lost tomorrow and won on February 14 at the MCG we’d take that as well. Tomorrow’s a big game for us and we’re desperate to put in a big performance against a much-fancied Australia side, ” he said

It’ll be another good marker of where we’re at as a team and how far we’ve come,” he added.

Asked if England are going into the World Cup as underdogs, Buttler said, “It’s never the worst place to be and our recent form over the last 12 months wouldn’t suggest we’d be anything else either. But we’ve got into a pattern where we’re starting to build confidence as a side and we’ve started to put in performances where we feel they’re good enough to win games of cricket going into a World Cup.”

“I think the most important part of a World Cup is getting into a quarter-final, whatever way you do that. And then it is three games and you could be world champions. I think our main focus has to be getting through to a quarter-final and then see how we go from there,” Buttler said.

On Sunday, Australia will be looking to unleash Mitchell Johnson on England for the first time on this trip and given how he rattled them on the Ashes trip last year, the visitors will be wary of the tearaway fast-bowler.

“I think we showed some really good character yesterday in beating India. We probably could have bowled them out for less as their 10th wicket partnership got a few more than we would have liked. But we came through a sticky situation, got a win and made it to the final. It definitely gives us more confidence,” he signed off. 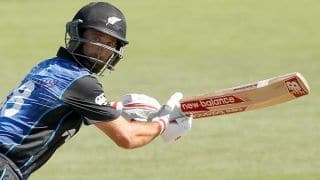