Mitchell Johnson, one of the most feared fast-bowlers was brutally punished by Tillakaratne Dilshan,

Tillakaratne Dilshan is one of the batsmen who redefined the limited-overs cricket with his exciting strokeplay and ability to improvise. In the twilight of his career, once again he was at his brutal best as he smashed six boundaries in one over of the Pool A match of the ICC Cricket World Cup 2015 between Australia and Sri Lanka at Sydney Cricket Ground (SCG) on Sunday. Mitchell Johnson, one of the most feared fast-bowlers was bowling the sixth over, he was brutally punished by Dilshan, in a way showing that Sri Lanka are still in the hunt for chase.  (ICC Cricket World Cup 2015: Full coverage)

The first boundary of the over was driven back past the bowler while the next ball was hit in a similar fashion for another boundary down the ground. It was a classical straight drive that bowlers hate to see. Improvising, Johnson bowled the third ball a bit short, but Dilshan took advantage of the height and swung the ball through midwicket. The next was one in short, and Dilshan pulled him over square leg. It was four in a row.

The fifth ball was smacked through covers before the last ball, a slower one was well anticipated by Dilshan, as he stylishly drove it through the same area. Dilshan collected 24 off Johnson’s over. 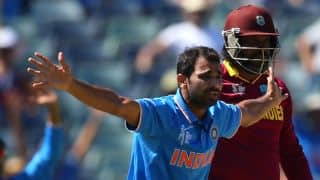