Marlon Samuels was found to have breached Article 2.1.8 of the code, which relates to "abuse of cricket equipment or clothing, ground equipment or fixtures and fittings during an international match".

West Indies star batsman Marlon Samuels has received an official reprimand and one demerit point after being found guilty of a Level 1 breach of the ICC Code of Conduct for Players and Player Support Personnel during his side’s World Cup Qualifier match against Zimbabwe at the Harare Sports Club on Monday. The 37-year-old was found to have breached Article 2.1.8 of the code, which relates to “abuse of cricket equipment or clothing, ground equipment or fixtures and fittings during an international match”.

Samuels was declared `Man of the Match` for his brilliant batting performance in West Indies chase of 290 to help his side inch closer to a berth in the World Cup 2019. Samuels struck a blistering 86 off 80 balls with six fours and four sixes as West Indies clinched a comfortable four-wicket win over Zimbabwe to set up their mouth-watering winner-takes-all match against defending champions Scotland.

The right-handed batsman was charged by on-field umpires Michael Gough and Simon Fry, third umpire Adrian Holdstock and fourth umpire Paul Wilson for hitting and damaging the 30-yard circle disk with his bat on his way back to the dressing room.

Samuels admitted the offence and accepted the sanction proposed by match referee Graeme La Brooy and, as such, there was no need for a hearing. 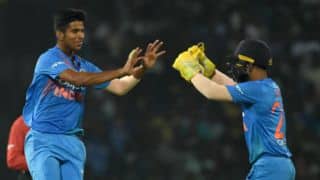