In Match 2 from Group A, Ireland beat Netherlands by 93 runs.

Afghanistan vs Scotland: Scotland notched up their first win of the tournament against favourites Afghanistan in Match 4 of the 2018 World Cup Qualifiers. Chasing 257, Calum Macleod led from the front, scoring a brilliant 157 not out. Macleod, along with Richie Berrington (68) steadied Scotland s ship after they lost early wickets. The pair added 208. Macleod completed his fifth ODI century in the process as Scotland reached their target with 7 wickets to spare. Mujeeb Zadran claimed 2 wickets while skipper Rashid Khan claimed 1.

Batting first, Afghanistan never got off to a quick start, Mohammad Shahzad getting 30. Then Mohammed Nabi and Najibullah Zadran that steered Afghanistan s ship to safety. The pair added 149 runs before Najib fell for 67. Nabi was run out next ball for 92. They eventually bowled out for 255. Bradley Wheal and Berrington picked 3 wickets each.

Papua New Guinea vs UAE: Asked to defend 175 in 31 overs, Mohammad Naveed broke PNG s batting to bits. He claimed the top 4 wickets with just 23 runs on the board. Only Charles Amini, along with the lower-middle order, provided some resistance. Naveed picked up his fifth wicket as PNG was bowled out for 113. UAE won by 56 runs.

Earlier, Rohan Mustafa and Ashfaq Ahmed provided UAE a near-perfect start. The pair blitzed their way to 91 runs, before Ashfaq lost his wicket on 50. Norman Vanua then demolished UAE s lower order, though some of the collapse can be attributed to poor running in between the wickets. Mustafa kept his cool and took his side past 200. He eventually lost his wicket for 95.

In reply, Netherlands never got going. Their revised total of 243 from 41 overs proved too much. There were starts, but no one made it big. Ryan ten Doeschate scored 21 on his return. Tim Murtagh started the collapse, getting the openers. Murtagh and Barry McCarthy got rid of the tail in no time. Van der Gugten finally departed on 33 as Netherlands innings came to an end on 149, handing Ireland a 93-run win. 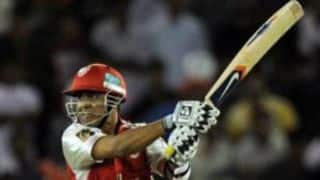