Chris Gayle and Shimron Hetmyer with their respective centuries made the target next to impossible for UAE.

West Indies posted a mammoth total of 357 against UAE in the Match 6, Group A of the ICC World Cup Qualifiers 2018. Chris Gayle and Shimron Hetmyer with their respective centuries made the target next to impossible for UAE. Gayle struck 7 fours and 11 sixes in his innings of 123 whereas, Hetmyer smashed 14 fours and 4 sixes to register his maiden ton.

UAE gave a tough fight with Rameez Shahzad scoring an unbeaten 112*. He hit 9 fours and 4 sixes in his innings and was well supported by Shaiman Anwar (64) and Adnan Mufti (45). Jason Holder picked five out of six UAE wickets conceding 53 runs as West Indies won by 60 runs.

Man of the Match: Shimron Hytmer

Scotland registered their second win in the tournament defeating Hong Kong by four wickets. Hong Kong who were 46 for no loss at a stage were all-out for a mere 91 after they were put to bat by Scotland. Only three players managed to enter the double figures with Nizakat Khan being the top-scorer (26). Tom Sole was the pick of the bowlers for Scotland with figures 4 for 15 in his 10 overs ( 5 maidens).

Scotland lost six wickets in pursuit of 92. Skipper, Kyle Coetzer led his team to victory with an unbeaten score of 41. Ehsan Khan picked up three wickets for Hong Kong in his six overs. A total of 17 maiden overs were bowled in the match of which 14 were bowled in the first innings.

Man of the Match: Tom Sole

PNG posted a competitive total after being put to bat in the Match 5, Group A. Tony Ura with his record breaking 151 took the teams total to 235 in 50 overs. He stitched a 83 run partnership with Norman Vanua for the 9th wicket. Andy McBrine picked up three wickets for Ireland conceding 38 runs.

PNG did well with the ball and took the match to last over with Ireland requiring three runs off it. Gray Wilson hit the first ball of the last over for a boundary registering a win for his side. Skipper William Poterfield and Ed Joyce had set the platform early on by scoring 111 and 53 respectively.

Man of the Match: Tony Ura 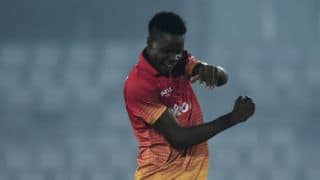 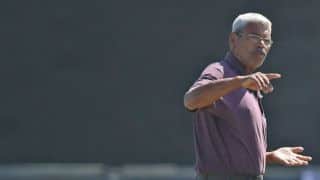