Shane Watson's unbelievable run in the ICC World Twenty20 continued as he virtually assured Australia a place in the semi-finals of the event with a comfortable eight-wicket win over South Africa in the their second Super Eights match. 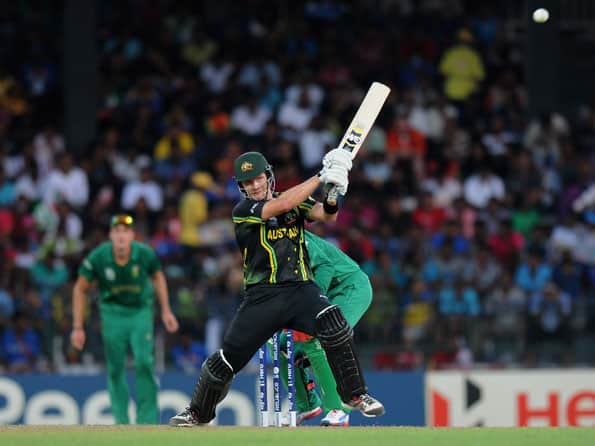 Shane Watson’s unbelievable run in the ICC World Twenty20 continued as he virtually assured Australia a place in the semi-finals of the event with a comfortable eight-wicket win over South Africa in the their second Super Eights match.

Chasing a modest target of 147, Watson once again showed his all-round prowess with a smashing 70 off 47 balls after taking two important wickets as Australia reached the target with 14 balls to spare.

His innings included eight boundaries and two sixes off left-arm spinner Robin Peterson and that fetched him his fourth consecutive man-of-the-match award.

Watson has so far scored 234 runs in four matches at an astonishing average of 78, not to forget the 10 wickets that he has taken.

Watson’s 99-run second wicket partnership with the ever-dependable Mike Hussey (45 not out) laid the foundation of the Australian chase.

When Watson finally got out at the team score on 109, the victory was just round the corner.

After Morne Morkel and Dale Steyn had kept the Australians quiet for the first five overs, the counter-attack started in the sixth with Watson hitting Morkel for three boundaries. The first boundary was hit through point, the second through covers and the third one through the short fine leg.

With 15 runs coming from that over, the Australian innings finally got the momentum it required.

There was no stopping Watson after that as he played shots all round the wicket. When Peterson dropped it short, he rocked back to pull it over deep mid-wicket. When Parnel bowled it short, he pulled over square leg for a six which also brought up his third half century in the tournament.

Earlier, leg-spinner Xavier Doherty sparkled with figures of three for 20 to help Australia restrict South Africa to a modest 146 for five.

Australian skipper George Bailey‘s decision to play Doherty ahead of Dan Christian on a slowish track turned out to be a masterstroke.

Handed the new ball along with left-arm pacer Mitchell Starc, Doherty responded to his captain’s call and picked up the crucial wickets of Richard Levi, Jacques Kallis and JP Duminy to put Australia in the driver’s seat after Bailey won the toss and elected to field.

Doherty was ably supported by in-form Shane Watson, who finished with figures of two for 29, which included the important wickets of Hashim Amla (17) and South Africa skipper A B de Villiers (21).

Robin Peterson top-scored for South Africa with a quick-fire 32 off 19 balls, while Farhaan Behardien (31) and J P Dunimy (30) also made useful contributions for the Proteas.

Opting to bat, South Africa lost wickets at regular intervals to make life difficult for themselves.

South Africa witnessed a terrible start to their innings as Doherty cleaned up Levi in the third ball of the innings.

Australia picked up two more quick wickets in the form of Kallis and Amla as South Africa slumped to 33 for three in 5.5 overs.

While Kallis nicked a Doherty delivery to Mathew Wade behind the stumps, Amla was caught by Wade off the bowling of Watson.

Duminy and de Villiers then added 31 runs for the fourth wicket before the former was stumped by Wade off Doherty in the 11th over.

With pressure building on him to score quickly, De Villiers perished, caught by Bailey off Watson.

But thanks to a vital unbeaten 60-run sixth-wicket stand between Behardien and Peterson which came off just 35 balls, South Africa managed to inch closer to 150.

While Behardien hit two fours and a six during his 27-ball innings, Peterson’s 32 came off just 19 balls with the help of six boundaries. (PTI)