All-rounder Luke Wright hit a career-best unbeaten 99 as England batsmen feasted on a relatively inexperienced Afghanistan attack to put up a daunting 196 for five in a group A match of the ICC World Twenty20. 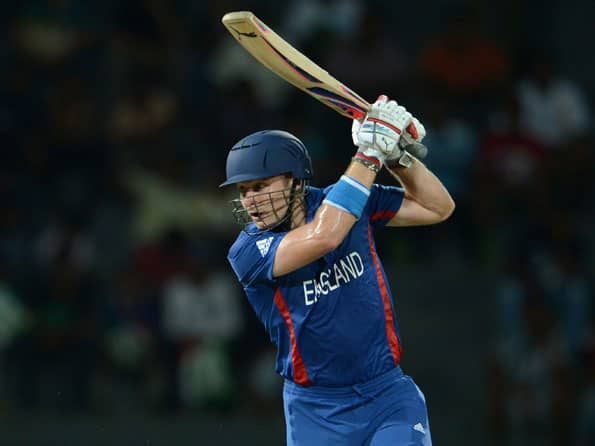 All-rounder Luke Wright hit a career-best unbeaten 99 as England batsmen feasted on a relatively inexperienced Afghanistan attack to put up a daunting 196 for five in a group A match of the ICC World Twenty20.

Wright smashed the Afghan bowlers all around the park during his 55-ball knock that contained eight fours and half a dozen of sixes. In the process, Wright became England’s highest individual surpassing Kevin Pietersen’s 79.

He also got good support from the likes of Alex Hales and Eoin Morgan who chipped in with useful scores of 31 and 27 respectively. Jos Butler (15) and Jonathan Bairstow (12) also hit a few lusty blows to keep the momentum going in favour of defending champions.

Wright was unlucky to miss out on a three-figure mark as he got only two off the last ball of the innings. Earlier, he quickly reached 94 from 76 with three big hits off Izatullah Dawlatzai.

The pacer, who gave away 56 runs in his three overs was hit for 32 in the penultimate over.

Opting to field, Afghanistan seamer Shapoor Zadran provided a dream start to his team as he forced English opener Craig Kieswetter to chop one onto his stumps in what turned out to be a wicket maiden over.

Till the end of the fourth over, the unheralded Afghan bowlers did a decent job with England at 15 for one.

Afghanistan captain Nawroz Mangal’s decision to give Shapoor an extra over opened the floodgates.

The nippy left-armer couldn’t hold onto his nerve as he gave away 23 runs in the fifth over of the innings, which included three boundaries and a huge six from Wright.

Wright lifted Shapoor over long on boundary and prior to that hit a four. Hales also got a couple of boundaries in that over.

In the very next over, England again scored 15 runs from seamer Izatullah Dawlatzai’s over.

With 38 runs from two overs, England were off the blocks. Hales and Wright added 69 runs for the second wicket.

Hales was unfortunately run-out having backed too far with Wright’s firm push as the ball deflected off bowler Karim Sadiq’s hands to hit the stumps. The opener made 31 off 27 balls with help of five fours.

There was no stopping Wright though as he went from strength to strength. Wright lifted leggie Samiullah Shenwari over deep mid-wicket for a big six to reach 49 and then completed his half century with a single. His 50 came off 34 balls.

Left-hander Eoin Morgan also joined the party as they completed their half-century partnership off 38 balls.

The 16th over bowled by off-spinner Mohammed Nabi saw England plunder 22 runs with both Morgan and Wright hitting a six and a boundary each. (PTI)