Bangladesh took consolation from batsman Shakib Al Hasan after his sizzling 84 ensured they bowed out of the World Twenty20 with their heads held high. 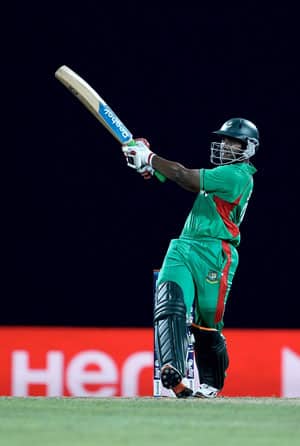 Bangladesh took consolation from batsman Shakib Al Hasan after his sizzling 84 ensured they bowed out of the World Twenty20 with their heads held high.

the left-hander slogged Pakistan’s bowlers all over the Pallekele stadium field, reaching the third highest score of the tournament so far, as Bangladesh set a challenging 175-6.

Big scores from Imran Nazir (72) and Mohammad Hafeez (45) ensured Pakistan got the win, and reached the Super Eights round, with room to spare.

But for Bangladesh, Hasan’s performance at least softened the blow of their latest failure on the world stage.

“He showed that he is our best player,” said captain Mushfiqur Rahim. “There is no doubt about it, it’s a privilege to play with him. He is probably the best player Bangladesh has ever produced in my opinion.”

The South Asian minnows also exited last year’s one-day World Cup in the first round, and Rahim said he felt sorry the rest of the team could not finish the job after Hasan’s innings.

“We feel bad for Hasan after he played such a wonderful innings and we could not win the match,” said Rahim.

“He almost carried the team alone and we had some responsibilities to make it a match-winning innings, but unfortunately we could not do that. If he can stay fit for another couple of years it will be great for Bangladesh team.”

But Rahim said he was happy with his team’s improvement since losing their heavy opening loss to New Zealand.

“Although we did not get the desired results, but I am quite happy after how we raised our game in the second match and we must continue to learn for the sake of our future,” said Rahim.

“It’s always disappointing to go out of the tournament early. We did not play our best game in the first match so that put us under huge pressure in the second. Also, probably, we were nervous,” he added.

Bangladesh’s batting prompted some disquiet among the Pakistani team about their fast bowlers, after Umar Gul conceded 43 off his three overs and Sohail Tanveer went for 25 in his three.

“Yes, there is a bit of concern as a captain. Our fast bowlers are not producing in the manner that they can,” said Hafeez, Pakistan’s captain.

But Rahim also lamented the quality of Bangladesh’s batting after Nazir and Hafeez’s opening stand of 124 doused any hopes of an upset.

“We have spin bowling in our line-up but we did not get any spin in the wicket so that put us under pressure,” said Rahim, who fielded three left-arm spinners against New Zealand.

“Also in our pace attack we don’t have quality bowlers… If we had played better in first game that would have given us the belief,” he added.