England skipper Stuart Broad was delighted at his team's 116-run victory over Afghanistan in the ICC World Twenty20 and attributed it to the "outstanding" and "mature" batting by the English batsmen. England skipper Stuart Broad was delighted at his team’s 116-run victory over Afghanistan in the ICC World Twenty20 and attributed it to the “outstanding” and “mature” batting by the English batsmen.

“We batted maturely, Luke Wright‘s innings was outstanding. When the guys came in at the end and struck the ball it was very powerful and exciting to see,” Broad said after the match.

“In the field, we bowled well at the start, you’re always going to concede a few runs in T20 but it was a good win. We are delighted at our performance.”

“It’s amazing to see teams like Afghanistan, it’s important to grow the game and hopefully this inspires people in their country,” he added.

Asked about their dead rubber against India on Sunday, Broad said: “It is hard to say it is a dead rubber. In T20 it is like what team turns up for the particular day and we’ll be fired up and wanting a win. That’s the only attitude to take when you cross the line.”

Man of the Match, Wright, who became the highest individual scorer for England in World T20 surpassing Kevin Peitersen’s 79, said he always wanted to prove that he was a better player.

“Yeah, it was a bit of a special evening, I was desperate to play well and win games for England so it’s special to be man of the match,” he said.

“We tried to hang around and see what we could get early on. As I’ve got older I’ve gone away and tried to work on my game and prove that I’m a better player.

“The amount of guys I’ve seen have time away from England, like Ian Bell, and come back a better players, talking to other coaches and players about how I could improve,” he added.

Wright said he wants to bowl more to contribute to his team’s cause.

“I want to bowl more, I’ve been used a a bit of a one-over specialist. It’s something that came from my knee injury but I’ll keep working on it,” he said.

Afghanistan skipper Nawroz Mangal, who spoke with the help of an interpreter, said: “We have enjoyed the tournament.

England played like a champion, outplayed us in all the three departnement. The start was good but we could not maintain it.

“Everyone followed us closely, there were high expectations from us. Unfortunately, we could not deliver. But I would like to tell them that don’t be disapoointed with us, we will try our best to give you some good news in future,” he added. (PTI) 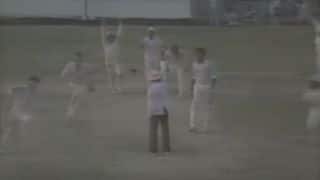 India vs Australia 1986-87: The dramatic last day of the Tied Test at Chennai