Ravichandran Ashwin and Yuvraj Singh set it up with a superb display of spin bowling before Virat Kohli took centrestage with an unbeaten 78 as an inspired India thrashed arch-rivals Pakistan by eight wickets to keep their title hopes alive in the ICC World Twenty20 on Sunday. 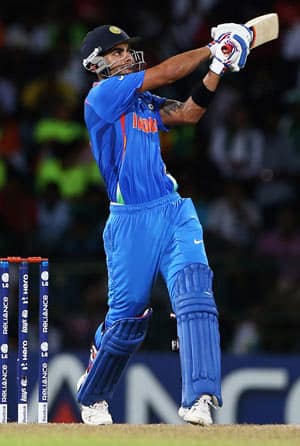 Ravichandran Ashwin and Yuvraj Singh set it up with a superb display of spin bowling before Virat Kohli took centrestage with an unbeaten 78 as an inspired India thrashed arch-rivals Pakistan by eight wickets to keep their title hopes alive in the ICC World Twenty20 on Sunday.

Ashwin (2/16) and Yuvraj (2/16) snapped up four wickets between themselves as Pakistan were shot out for a meagre 128 in 19.4 overs. Lakshmipathy Balaji also complemented the ?spin twins? with impressive figures of 3/22 in 3.4 overs.

Kohli, who has been Pakistan’s nemesis in the past, hit a scintillating unbeaten 78 off 61 balls as India won with three overs to spare. The Delhi lad hit nine boundaries and two sixes to take the team home in the high-voltage contest watched by a capacity crowd.

However, Pakistan are still ahead in terms of net run rate of -0.426 which is shade better than India’s -0.452. Had India won with 20 balls to spare, they would have been No 2 in the group.

India will now have to defeat South Africa in their last group-2 match on Tuesday to make it to the semi-finals.

India’s unbeaten record against Pakistan in ICC World Cups has thus been kept intact having beaten them five times in the 50-over version and thrice in the T20 format.

Kohli started with a thickish outside edge off Raza Hasan for a boundary but then played some lovely strokes. A backfoot cover drive off Saeed Ajmal and lovely cover drive off Yaser Arafat were glorious strokes.

He also lofted Shahid Afridi over long-off for a six.

Whether driving on the up or playing off his hips, Kohli was a treat to watch.

Virender Sehwag. on the other hand, was happy to play the second fiddle during the 74-run partnership for the second wicket but did play a lovely lofted shot off Umar Gul?s bowling. More PTI KHS MRM

Pakistan captain Mohammed Hafeez’s decision to bat first on a slow Premadasa track failed to produce the desired result as Ashwin and Yuvraj frustrated the opposition batsmen by maintaining superb line and length.

Ashwin, who operated from round the wicket, had superb figures of two for 16 from four overs while Yuvraj also had identical figures but from three overs.

The duo snapped four Pakistan wickets for only 32 runs in seven overs and it was the reason why Hafeez and Co could not reach a respectable total. Lakshmipathy Balaji also complemented the ?spin twins? with impressive figures of 3/22 in 3.4 overs.

The only notable partnership was of 47 runs between Shoaib Malik and Umar Akmal. Malik was the top scorer with 28 before he gave an easy catch to Rohit Sharma. Last match?s hero Umar Akmal played a pull shot off an Ashwin delivery but couldn?t clear Suresh Raina in the deep.

India versus Pakistan matches are never short of drama and this match was also not an exception. Zaheer Khan?s first over saw him bowl three wide deliveries and then being square driven by Imran Nazir for a boundary before Virender Sehwag dropped the opener at first slip.

Irfan Pathan started off the collapse by removing Nazir who had shuffled a long way but the umpire thought that left-arm seamer?s incoming delivery would have hit the stumps.

Nazir stood his ground for a while before leaving.

To everyone’s disbelief, Shahid Afridi walked in at No 3 and smashed the first delivery from Pathan over his head and then another boundary off the bowler through the cover region.

However, with the former Pakistan captain, opposition teams always fancy a chance and Balaji bowled a short one which Afridi tried to pull it over mid-wicket boundary but was caught by Suresh Raina at the boundary ropes. Afridi made only 14.

Yuvraj then got into the act as he removed left-hander Nasir Jamshed and wicketkeeper-batsman Kamran Akmal in quick succession to reduce Pakistan to 49 for four. Both hurried onto their shots.

Jamshed tried to play a slog-sweep which was smartly taken by Dhoni while Kamran tried an expansive cover drive of an arm ball only to give the Indian captain his second catch.

Pakistan captain Hafeez scratched around for 28 balls for his 15 before he dragged one onto his stumps off part-timer Virat Kohli?s bowling.

Umar and Malik then got together to conjure a partnership but Ashwin dismissed both of them in quick succession to end Pakistan?s chances of a big score. (PTI)