Nepal have posted a total of 126 for five in 20 overs against Bangladesh in an ICC World T20 2014 Group A warm-up tie at Chittagong on March 18, 2014. Paras Khadka scored 41 and Sharad Vesawkar scored 40. They shared a record 85-run partnership for Nepal in T20Is for any wicket. Al-Amin Hossain took two wickets for Bangladesh in the T20 World Cup clash.

Earlier, Bangladesh captain Mushfiqur Rahim won the toss and elected to field first. Subash Khakurel and Sagar Pun opened the batting for Nepal. It was a slow start as both Mashrafe Mortaza and Al-Amin Hossain did not give much away. Pun did hit the first four over point in the second over. The slow start forced Khakurel to slog a length delivery from Farhad Reza. He only top-edged it to Abdur Razzak at mid-off. He was out for eight off 13 deliveries.

Pun then slogged one from Mortaza over mid-wicket for another four. Gyanendra Malla then struck two consecutive fours in one over bowled by Mortaza. Just when it seemed as the Nepal batsmen got some momentum, they lost two wickets in one over from Al-Amin. First Pun spooned a straight delivery to Shakib Al Hasan at cover. He was out for 12. Malla then was dismissed LBW for 13.

Those wickets brought captain Khadka and Vesawkar at the crease respectively. Khadka broke the shackles with a drive for a four through cover off Reza’s bowling. Al-Amin then bowled a short delivery and Sharad pulled it away for a four through deep mid-wicket. That brought up the 50 for Nepal.

After three overs of only scoring 10 runs, Khadka got two fours in one over from Nasir Hossain. The first was flicked over square-leg and the second was guided through third-man. Al-Amin mis-fielded as the ball reached the boundary. Mushfiqur then missed a stumping chance as Vesawkar came forward and missed with a swing. The ball kept low and Mushfiqur could not collect the ball.

Nasir Hossain then bowled a full-toss outside off-stump and Vesawkar got an outside-edge as the ball went for a four through the vacant slip cordon. The 50-run partnership between the duo came in the 16th over. Khadka moved away to the leg side and drove one above extra-cover for a four off Reza. Vesawkar then scooped one over the short fine-leg fielder for a four. Next ball he cut one in front of point for another four. A total of 14 runs came from the 17th over.

Khadka then crashed a length delivery from Razzak to the cover boundary for a four. Khadka was bowled by Mortaza in the 19th over for 41. Vesawkar then got run out on the last ball of the 20th over for 40. There was a lot of dew on the field and the Nepal players will find it difficult to grip the ball. Advantage will be with Bangladesh to win the match. 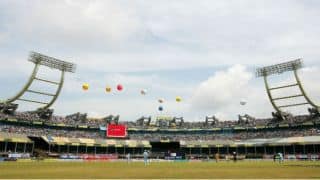