Bravo encouraged Sammy to keep his eyes on the ball and hit while abandoning strike rotation.

Advice under pressure to captain Darren Sammy from his deputy Dwayne Bravo helped craft an uncompromising sixth wicket stand that snatched the momentum away from Pakistan and propelled West Indies into the semi-finals of the ICC World T20 2014 Championship.

As hopes of a semi-final birth began fading with the West Indies 84 for five at the end of the 15th over, Bravo encouraged Sammy to keep his eyes on the ball and hit while abandoning strike rotation, reports CMC.

The two all-rounders launched a ferocious assault in a 71 run stand as the Windies plundered 82 from the last five overs.

“We are powerful enough if we get close to the ball to hit it over the ropes. In those situations, the best of them all go for runs. We had nothing to lose, we were under pressure,” said Bravo, who was voted man of the match for leading the onslaught, blasting 46 off 26 balls with four massive sixes.

“So I said to Sammy, as long as we stay still, don’t worry about picking or trying to rotate, just stay still, keep your eyes on it and hit it.”

Sammy scored a career best 42 not out as Windies made 166 for six off their 20 overs. They then bowled out the Pakistanis for just 82 to win by 84 runs — their biggest margin of victory in a T20 International.

“We were slow at the start and we lost some key wicket,” said Bravo.

“Our aim was to get at least 135 to 140 with the start we got, but the self-belief we have, the form and the power we have, the momentum went with us, and we finished positively”.

Lendl Simmons chipped in with 31 from 29 balls while Marlon Samuels struggled with 20 from 18 balls, but big-hitting opener Chris Gayle (5) and his partner Dwayne Smith (8) were both dismissed cheaply.

After the batting heroics, Krishmar Santokie took a wicket with the first ball as the Windies bowlers dominated. Spinners Samuel Badree (4-0-10-3) and Sunil Narine (4-0-16-3) were brilliant while keeper Denesh Ramdin had a record four stumpings.

“If you take the game right down to the end, anything is possible, as long as we don’t give up and keep faith and have that self-belief that if we bat 20 overs, we’re going to get a decent total. But we have to bat 20 overs, so at no point did we let what happened in the middle overs get the better of us. That comes with experience and self-belief,” said Bravo.

“It’s good we did not panic. We showed in the Australia game what the difference can be as long as we have clean hitters at the wicket, so that’s our aim, that’s our strong point and we use it to the best of our ability.” West Indies will meet Sri Lanka in the semi-finals Thursday night.

Bravo also lauded his team-mates for their tenacity and professionalism during the tournament so far.

“It is important that we leave our legacy as players, not only West Indian players but cricketers. We have young kids looking up to us. West Indies is a team that you should try not to upset,” he said.

“We don’t step on anyone’s corns… we have played hard and we play with a smile on our face. We have done well so far but we want to get better in the semi-final and take it to the final. Everyone in the dressing room is happy and we want to share our happiness with all our fans and supporters.” 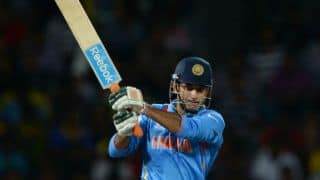