ICC teamed up with United Nations, who celebrate International Day of Sport for Development and Peace.

After three pulsating weeks of men’s and women’s international cricket played out in front of terrific crowds across Bangladesh, it is fitting that the finals of the ICC World T20 2014 should take place on the occasion of the first United Nations International Day of Sport for Development and Peace.

Throughout the World T20, the International Cricket Council (ICC) has partnered with UNAIDS and UNICEF to deliver the global awareness partnership THINK WISE, and worked with both Room to Read to promote literacy and WASH United to promote hygiene and good sanitation across Bangladesh,” the ICC said in a statement.

“It is not just at its major events that the ICC uses cricket as a tool for development and peace.”

The road to the men’s ICC World Twenty20 2014 began with a regional tournament in Africa in April 2012. One of participating teams on the opening day of that event was Rwanda, a country where 6 April also has significant connotations.

The date marks the 20th anniversary of the Rwandan Genocide that saw one million Tutsi and moderate Hutu people killed by soldiers and militia in just 100 days, and cricket is playing a small part in helping to heal the wounds from this event.

The Rwanda Cricket Association (RCA) is leading efforts to grow the game in the country, and the ICC, as well as supporting the RCA, has partnered with the charity Cricket Without Boundaries (CWB) to deliver the THINK WISE message to young people in Rwanda.

CWB has visited Rwanda 11 times since 2007, coaching more than 18,000 children and training nearly 200 new coaches. As well as teaching cricket skills, CWB also uses the sport as a way to introduce vital HIV and AIDS awareness messages, and also uses the game to help unite people from all different tribal backgrounds.

One week ago, the Afghanistan Cricket Board (ACB) was awarded the prestigious Laureus Sports Award in the ‘Spirit of Sport’ category. The Laureus Awards celebrate the greatest sporting achievements of the year, and Afghanistan was recognised for its remarkable success over the past 12 years and its role as a source of national pride. 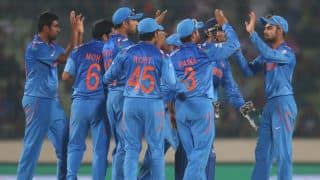