Jadeja also shares the dubious distinction of scoring more than 1000 runs without a fifty.

Mahendra Singh Dhoni is inarguably one of India’s finest finisher in the shortest format but there is one little piece of statistic which the ‘Captain Cool’ wouldn’t certainly be amused and would like to change it during the course of fifth ICC World T20 2014.

Believe it or not, the captain is yet to score his maiden half-century in T20 Internationals (T20I) having donned the blue jersey in 43 of the 46 matches that India has played so far.

Sounds weird but Dhoni’s aggregate of 772 runs is most by any batsman without a single fifty in T20’s. Incidentally, his highest score is 48 not out against Australia in a losing cause at the ‘Stadium Australia’ in Sydney.

Interestingly, during that particular match, Dhoni was batting on 45 after the completion of the penultimate over but to his utter dismay found that Ravichandran Ashwin consumed four of the six deliveries.

In the remaining two deliveries, he scored three runs to get to 48 not out as India lost by 31 runs.

Dhoni has mainly batted at No 5 or 6 (13 times each) in the T20’s which effectively meant that on most occasions, only few overs were left. A testimony to that is remaining not out on 16 occasions out of the 40 times that he went into bat during those 43 games.

The three games that he had missed out were when his jaded body needed rest. He opted out of the 2010 tour of Zimbabwe where India played two T20’s under Suresh Raina’s captaincy.

The other T20 game that he missed was during India’s tour of West Indies in 2011 when he had opted out of the limited overs series having played the ICC World Cup 2011 and Indian Premier League (IPL) back-to-back in four months of gruelling cricket.

In the list of most runs without a single half century, Dhoni is followed by South African all-rounder Albie Morkel (521 runs), Irishman Gary Wilson (510 runs) and the prolific Hashim Amla (413 runs).

Only 13 batsmen so far have scored more than 1000 runs in the T20 Internationals but none of the Indians are in that ‘Elite List’. Out-of-favour opener Gautam Gambhir is India’s highest scorer in the format with 932 runs in 32 matches.

India’s premier all-rounder Ravindra Jadeja is yet to score a half-century in either of T20s as well as domestic tournaments like Syed Mushtaq Ali T20 and IPL.

As far as the T20s are concerned, Jadeja has scored most runs without a fifty. In 108 T20 matches, Jadeja scored 1278 runs but his highest score is 48. 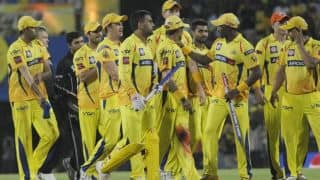