Josh Hazlewood added every time one gets an opportunity to perform, one tries to take it with both hands.

Kolkata: He might have grabbed a hat-trick against West Indies in the ICC World T20 2016 warm-up but Australia pacer Josh Hazlewood has hinted it would not be enough to get a place in the playing XI, saying there is lot of competition for every spot and he is just trying to grab every opportunity to perform with both hands. “They’ve probably got their XI in the back of their mind. Every time you get an opportunity to perform you try to take it with both hands,” said Hazlewood, who had reduced West Indies to 18/3 with his hat-trick in the fourth over. READ: Josh Hazlewood working on variations to succeed in India during ICC World T20 2016

“A couple of the quickies who did quite well in South Africa did not bowl in this match. There’s a plenty of competition for every spot,” he said as the Aussie rested James Faulkner and Nathan Coulter-Nile for the warm-up match alongside the big-hitting David Warner. “The one-day World Cup got a little bit longer but here we have got four games in pretty quick time. I don’t think there would be as much chopping and changing. We will have to choose according to the conditions,” he added. Hazlewood’s hat-trict was not enough as from 72/6, the Windies rode an unbeaten half-century by Darren Sammy and a quick-fire 33 by Carlos Brathwaite to overhaul the victory target of 162 with a ball to spare. ICC World T20 2016: Josh Hazlewood feels AB de Villiers toughest batsman to bowl against

Not ready to read too much into their surprise loss, Hazlewood said they would have gone about their job differently if it were a proper match. “Probably we would have gone a little bit differently if we really tried to win the game. If it was a game in the tournament it would have been different. We tried a few different things,” Hazlewood said at the post match news conference. We got pretty much what we needed but still things have to improve on as I said. They’ve got some dangerous hitters down the order. That’s their strength. But we can still improve,” said the pacer after Australia lost the warm-up match by three wickets yesterday. ICC World T20 2016: Josh Hazlewood, Nathan Coulter-Nile hopeful despite Indian conditions favouring spin

Hazlewood trapped Jason Holder lbw before rattling the stumps of Marlon Samuels and Dwayne Bravo to complete his hat-trick and he said his length did the trick. “On that wicket we were just told to bowl good length with the new ball. I just tried to hit the top of the stumps. I was lucky enough to get a couple of straight on. Pretty happy with the effort. There’s still a few things to work on but we’re improving as time goes on,” he said. READ: Josh Hazlewood apologises for swearing in New Zealand vs Australia 2015-16, 2nd Test

“I think with my length. I was a touch short in Johannesburg. The ball set up quite nicely. We’re just hitting top of the stumps on that wicket. It’s a little bit up and down and it worked for the start.” T20 may still look like a batmen oriented game but Hazlewood said a bowler still can grab his chances with a lot of tricks. “Certainly spinners do it over here. Up front you need to take wickets no matter what and put that batting unit on the backfoot. Otherwise they will enjoy freedom for the rest of the innings,” he said. ICC World T20 2016: Josh Hazlewood aims to stake claim in Australia squad

“You would always want an experienced spinner but they got to start at some point. I think Adam [Zampa] learnt a fair bit on the go tonight. He will better of on the run and hopefully keeps improving throughout the tournament.” He also lavished praise on Shane Watson and said the all-rounder would be handy in this conditions with his vast knowledge of playing here in the IPL. “He’s quite a special player, he is experienced as well for a young side. He’s been fantastic throughout South Africa and here as well. His knowledge of these grounds and conditions here will be pretty valuable,” he said of Watson who topscored with 60 as they scored 161/9. 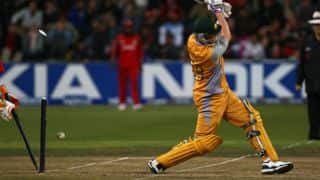