ICC World T20 2016: Umpires to be provided with helmets for the tournament

ICC World T20 2016: Umpires to be provided with helmets for the tournament

Umpires Richard Kettleborough and John Ward have been hit on their bodies during some of the recent matches.

In a move to make the game completely safe for umpires, the International Cricket Council (ICC) will issue helmets to the on-field umpires officiating in the ICC World T20 2016, scheduled to be held in India in Match 2016. We have already seen two umpires hosiptalised in a last few months after being struck by the ball during a match. The first incident was when Australian umpire John Ward was hositalised  after he was struck on the head, while officiating a Ranji Trophy game. Another such incident occurred in the fourth One-Day International (ODI) between India and Australia at Canberra when English umpire Richard Kettleborough was hit on the shin. READ: ICC World T20 2016 to feature Spidercams, but won’t disturb play: Dave Richardson

Kettleborough had to spend the night in a hospital before he was cleared to fly to Sydney to officiate the next match. During the recently concluded Big Bash League (BBL), Gerard Abood, an Australian umpire wore a helmet during the match. Umpire Ward too has resorted to putting on helmets in ODIs after that. “In the last three or four years, the fitness and the strength of the players has increased dramatically, and the bats are so much better than ever before, so the guys are hitting the ball a lot harder,” Kettleborough told cricket.com.au.

“We’ve seen some umpires being hit in recent times and it’s becoming quite dangerous, certainly in T20 and one-day cricket especially. I know for the T20 World Cup we’re all going to be issued helmets. We’re not obliged to wear them, it’s totally up to us, but it’s certainly something I’ll be taking on board and thinking about,” he added. READ: India favourites to win ICC World T20 2016, feels Sunil Gavaskar

“Our safety, as with the players, is paramount. The non-strikers are in danger too, as is the bowler in his follow-through, there’s no doubt about that. “It’s only a matter of time before someone gets hit quite badly,” said the English umpire.

Cricket Australia claims that it has been in touch with the other boards over the last 12 months about the same issue. “It’s no different to any other workplace – we want to make sure that our employees are safe,” a CA spokesperson said. READ: ICC World T20 2016: Kevin Pietersen desires to play tournament

“We’ve done surveying of umpires within Australia and overseas as well, and we’ve had some great results from that. “From there, we’ve been looking at what measures can be put in place to mitigate risk of ball strike for umpires, and also what types of protective equipment could be suitable,” he added. 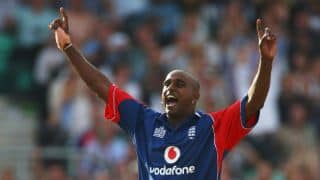