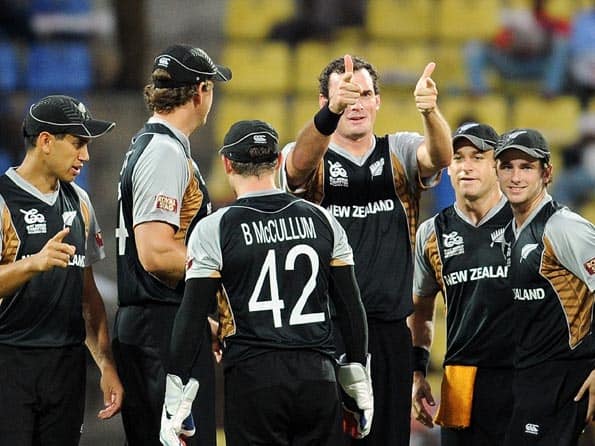 McCullum (123) was in devastating form as he butchered the Bangladesh bowlers with 11 fours and seven sixes in his 58-ball knock to guide New Zealand to 191 for three after being asked to bat in the opening Group D match at Pallekele International Cricket Stadium.

McCullum, whose blitzkrieg left the sparse crowd at the stadium spellbound, was on a record-breaking spree as his hundred was the highest score in any Twenty20 International as well as in the short history of ICC World T20.

His earlier T20 International hundred — 116 not out — came in February 2010 in Christchurch against Australia.

The earlier highest score in T20 International stands in the name of West Indian swashbuckler Chris Gayle (117 in 2007 edition of the ICC World T20 against South Africa in Johannesburg) and South African Richard Levi (117 not out against New Zealand in Hamilton in February this year).

Gayle’s 117 in the 2007 edition was the earliest highest score in ICC World T20. McCullum’s hundred today was the fourth century in the ICC World Twenty20 history.

The 30-year-old wicketkeeper batsman stitched another 78 runs for the third wicket with captain Ross Taylor (14 not out) from just 35 balls. He was out in the last ball of the innings off the bowling of Abdur Razzak.

Bangladesh never recovered from their top-order collapse and only Nasir Hossain put up a fight with a 39-ball 50. Their highest partnership was the 40-run stand for the fifth wicket between Mahmudullah and Hossain.

The start to the chase was disastrous with opener Tamil Iqbal being dismissed by Mills for a duck in the first over with Martin Guptill holding an easy catch.

Under pressure to maintain the steep asking rate, Shakib Al Hasan (11) and captain Mushfiqur Rahim (4) fell in quick succession — in the third and fifth overs — both falling to Mills as Bangladesh slumped to 37 for four in the seventh over.

Mohammad Ashraful fell for run-a-ball 21 in the seventh over and after that runs dried up as Kiwi captain Ross Taylor used both his spinners Nathan McCullum and Daniel Vettori in tandem.

By the halfway mark, the match was shut for Bangladesh as they could score just 54 for four with 138 runs needed from 60 balls at a stiff asking rate of 13.80.

There was an odd four or six from the Bangladesh batsmen but by the time Mahmudullah was out for 15 off Nathan McCullum in the 15th over, the asking rate had shot up to an impossible 21 per over.

With the match out of their grasp, Bangladesh tried to score maximum runs from the remaining overs to increase their Net Run Rate. Nasir Hossain hit two fours off veteran Vettori in the 16th over before being out two overs later off the bowling of Southeee.

Mashrafe Mortaza (5) did not last long as he was dismissed by Jacob Oram in the penultimate before Elias Sunny (5) fell to Southee in the final over.

Earlier, New Zealand made a slow start and lost opening batsman Martin Guptill cheaply early in the innings but once McCullum strode into the pitch, the Kiwis changed gear with a flurry of fours and sixes.

Guptill fell in the fourth over as he was cleaned up by a Abdur Razzak delivery and the Kiwis were just 29 for one at the end of the fifth over.

As soon as McCullum arrived at the crease in the fourth over at the fall of opener Martin Guptill (11), he punished Shafi-ul-Islam for a cover-drive four in the seventh over and then hoisted Shakib-al-Hasan for a huge six in the next over.

Shakib was met with the same treatment by McCullum again in the 11th over.

With McCullum in full gear, New Zealand added 48 runs in the next five overs, reaching 123 for two at the end of the 15th over. Though New Zealand lost the wicket of Franklin in the 15th over, the stage was set for the big total.

The last five overs yielded 68 runs with McCullum raining six fours and five sixes. He hit a six and two fours in three successive balls in the 17th over bowled by Shafi-ul-Islam.

It was followed by three fours in the 18th over bowled by Shakib-al-Hasan, two fours and a six in the penultimate over bowled by Elias Sunny and two hits for the maximum result in the final over bowled by Abdur Razzak before McCullum was out in the last ball of the innings.

All the Bangladesh bowlers, except for Abdur Razzak (2/28 from his four overs) and Mashrafe Mortaza (1/26 from four overs), had to face the fury of McCullum’s willow as the Kiwi veteran was unstoppable. (PTI)

ICC World T20 2012: Afghanistan opts to bowl against England in Group A clash