An unprecedented security greeted the ICC World XI side, to be led by Faf du Plessis, at the Allama Iqbal International airport in Lahore.

Lahore: A World XI squad comprising 13 players from seven top cricket-playing nations landed in Lahore early Monday amid massive security, with Pakistan hoping the tour will end years of international isolation. Pakistan has not hosted top-level international cricket barring five limited over matches against minnows Zimbabwe in 2015 since the Sri Lankan team bus was attacked by terrorists in March 2009, killing eight people and injuring seven players and staff. The World XI, which will play three Twenty20 internationals from Tuesday, arrived around 2:00am Pakistan time (2100 GMT) with air surveillance and dozens of police vans in attendance as the team was whisked to their hotel. FULL CRICKET SCORECARD: Pakistan vs ICC World XI 2017, 1st T20I at Lahore

Both the hotel and stadium will be cordoned off with 9,000 police and paramilitary staff deployed during the next five days. The World XI is led by South African skipper Faf du Plessis and coached by former Zimbabwe batsman and ex-England coach Andy Flower. A fourteenth player, Samuel Badree of the West Indies, will arrive later Monday. Earlier on Sunday Malik Mohammad Khan, a spokesperson for the government of Punjab province, of which Lahore is the capital, said authorities were providing “foolproof security for the World XI with a big contingent of security officials deployed”. Imran rejects PCB invitation to attend PAK vs ICC WXI tie

Parts of the city near the stadium will be cordoned off, with shops and restaurants around the venue to be shut for the duration of the series while spectators will have to pass through multiple security checkpoints. Since the 2009 attack Pakistan have been forced to play most of their “home” games in the United Arab Emirates with the Pakistan Cricket Board complaining they have incurred losses of around $120 million. PAK vs ICC WXI 2017: Aamer could opt out due to personal reasons 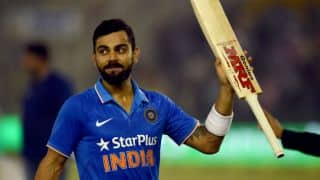