Home series will be played against Sri Lanka, New Zealand and Australia while India will travel to Bangladesh, England and South Africa for overseas tours.

After finishing as the second-best in the closely-fought World Test Championship final versus New Zealand, Virat Kohli-led Indian cricket team will begin their second cycle of the WTC with a five-match Test series against England, starting from August 4 in Nottingham. India will play a total of six bilateral series in the upcoming cycle with three away tours lined up in the next two years, starting with the England series next month.

India will host New Zealand in November this year for two Test matches and Sri Lanka will be hosted in February-March 2022 after the away tour of South Africa. The biggest series apart from England away Tests will be the marquee four Tests against Australia at home between September and early November next year.

The International Cricket Council (ICC) on Wednesday confirmed the fixtures for the World Test Championship 2021-23 cycle and announced a simplified points system with the winning team taking 12 points regardless of the length of the series.

India will once again not play Pakistan in the second cycle of World Test Championship.

As per rule, each of the nine nations in the World Test Championship calendar play against six nations of their choice and in the 2021-2023 cycle, India will play Sri Lanka instead of West Indies, whom they played in 2017 during the inaugural edition.

While the August 4 start of the five-Test series against England kicks off India’s WTC campaign, they will also tour South Africa between December 2021 to January 2022 and an away series against Bangladesh in November 2022.

The ICC on Wednesday also officially confirmed that teams will be awarded standardized 12 points for a win, four for a draw and six for a tie during the second cycle.

The ICC further said that percentage of points won will be used to determine the standings.

Earlier, each Test series carried a value of 120 points which led to certain inequality in the table as a team winning a Test in a two-match series got 60 points compared to five-game series where a Test win is valued at 24 points.

ICC Acting Chief Executive Geoff Allardice said the changes were made to simplify the points system while taking learnings from the disruption last year.

“We received feedback that the previous points system needed to be simplified. The Cricket Committee took this into consideration when proposing a new, standardized points system for each match,” Allardice said in a statement.

“During the pandemic we had to change to ranking teams on the points table using the percentage of available points won by each team, since all series could not be completed.

“This helped us determine the finalists and we were able to complete the championship within the scheduled time frame. This method also allowed us to compare the relative performance of teams at any time, regardless of how many matches they had played.”

Apart from the India-England series, the Ashes later this year will be the only other five-match affair in the second cycle which will end in June 2023.

Australia’s tour of India next year is the only four-Test series in the upcoming cycle. India captain Virat Kohli said after losing the inaugural WTC final to New Zealand, he expects his side to regroup with “new energy” in the new cycle. 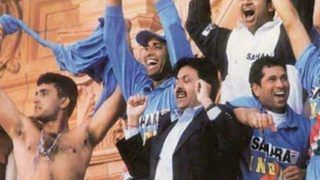