Pant's wobbly form behind the wickets once again came to attention when he dropped four catches in the third ODI between India and West Indies at Cuttack. 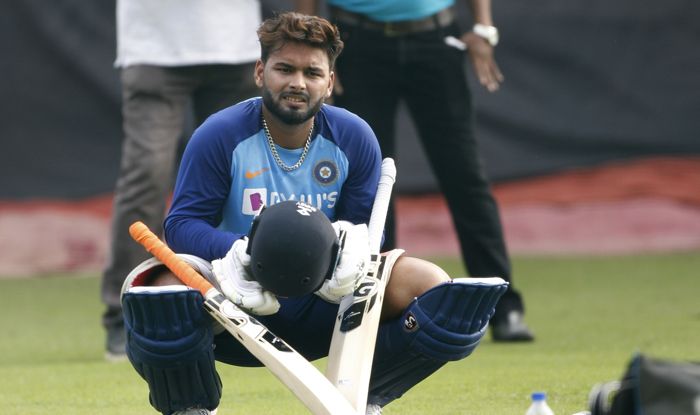 Chief selector of the BCCI MSK Prasad feels Rishabh Pant‘s indifferent form with the bat more so in Test cricket could have had a severe effect on his wicketkeeping skills. Pant was sidelined from India’s three-Test series against South Africa at home last month and replaced by Wriddhiman Saha, and Prasad believes his indifferent form behind the wickets can have something to do with the 22-year-old not getting enough runs.

“If you don’t keep well, it affects your batting. And if you don’t get runs, it affects your keeping. Whenever you are under pressure, you stiffen up. Your arms, shoulders, biceps, forearms – everything stiffens up. That’s when the ball starts popping out because of hard hands,” Prasad told Hindustan Times. “When you are in a relaxed state of mind, the way you receive that ball is different to the way you collect when you are under pressure.”

Pant recently scored his maiden half-century in ODIs, but his wobbly form behind the wickets once again came to everyone’s attention when he dropped four catches in the third ODI between India and West Indies at Cuttack. Prasad feels there could be many elements behind Pant’s scratchiness behind the stumps but is confident of the youngster improving with a long road ahead of him.

“It’s a combination of everything,” Prasad added. “See, he is young and is still a work-in-progress. But there is a lot of time ahead for him. Since he got in the Indian side at a young age, he hasn’t played much domestic cricket. That is also one of the reasons,” Prasad added. “I am sure he will come back strong. It’s also good that this has happened early in his career.”

However, the Prasad-led selection committee has continued to back Pant, with the belief that the under-fire wicketkeeper-batsman holds all the potential to be a match-winner going ahead. After all, Pant does in fact have Test centuries in Australia and England and Prasad reckons all he needs to do is give himself more time in the middle.

“If he has that sort of ability, to get Test hundreds in Australia and England, he needs to be backed.” said Prasad. “He is focusing on playing long innings now, rather than going there and trying to hit every ball that he faces. He will learn with age… just like you look to middle the ball when you’re batting, wicketkeeping is about collecting the ball in the middle of the gloves.”