Pandya said how he isn't a batting or a bowling allrounder and is in fact, more than capable of filling a void in both departments.

His place in the Indian team has often been subject to scrutiny, but Hardik Pandya feels that his job in the Test side is not restricted to any one particular role. The allrounder, who made a strong case for himself with a swashbuckling century against Sri Lanka last year, has since blown hot and cold. Barring his 93 against South Africa in the first Test at Cape Town, Pandya hasn’t had any sizeable contributions.

As clamours for Kuldeep Yadav‘s inclusion in India’s Playing XI for the Lord’s Test grew louder, it was almost certain that Pandya would not make it to Lord’s. But the axe fell on Umesh Yadav, and Pandya was given another opportunity. On his much-debated role in the side, the 24-year-old highlighted how he isn’t a batting or a bowling allrounder and is more than capable of filling a void in both departments.

“I don’t have any one particular role. I’m a batsman when I’m batting, bowler when I’m bowling,” Pandya said, while speaking to the media after the end of play on Day 3. “That’s my role, to keep it right and try to make sure that the batsman makes mistakes rather than me trying out too many stuff. We know that they love to play shots and when you’re doing that you tend to make a few errors.”

READ: India’s problems are of their own making

After being bowled out for 107, Saturday gave India a chance to even things up, and they seemed to be on the right track, restricting England to 131/5, with every chance of pinning them under 200. That was, before wicketkeeper Jonny Bairstow and Chris Woakes changed the complexion of the game through a 189-run stand with the allrounder registering his maiden Test century. England ended Day 3 at 357/6, leading India by 250 runs.

“Nothing happened, and that was the problem. As a bowling unit we tried but the ball stopped swinging and Woakes and Bairstow took the game away. That happens in Test cricket. You give five wickets quickly and then one partnership changes everything. It’s part of the game,” Pandya said.

England’s batting was a stark contrast to their opposition. Earlier, their bowlers made a strong statement, making the most of a rain-filled day one and overcast conditions to dismiss India for 107. James Anderson, who took 5/20, mentioned how England would have bowled out any team in such a scenario. It was a sentiment that Pandya echoed.

“Any team would have gotten the same score as we did, because batting in conditions where it’s drizzling constantly, and the wicket is wet is challenging. Today when we bowled, the sun was out, and it was bright all day. Today’s was the actual surface we were expecting at the start of play, but because of the weather the wicket changed,” the allrounder added.

“Except the first day, I don’t think we expected anything else. First day itself, like I said, it was different than what we expected. The wickets didn’t do much, but the weather and overcast conditions were obviously aiding the seam bowlers a lot. That’s the only difference,”

On a day when England battered the Indian bowlers, the fact that R Ashwin and Kuldeep Yadav went wicketless was quite alarming. Pandya said the lack of footmarks made it tough for the spinners to get purchase.

“Obviously. We had some thought behind it (Kuldeep’s inclusion). But we felt that three seamers were enough. We bowled properly, gave our full effort. Had this been a five-day game, the spinners would have come to use, but with the rain and everything, it stopped. There weren’t many footmarks created so it was not gripping that much,” he said. 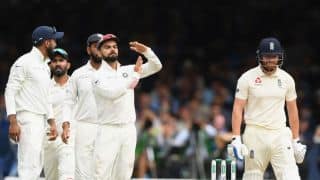 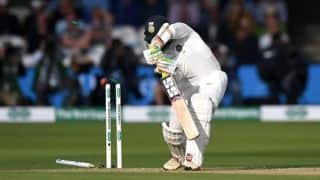