I'm the only player that really paid: Bravo on India tour pull-out

I'm the only player that really paid: Bravo on India tour pull-out

Bravo's WI arrived in India in 2014 to play three Tests, five ODIs and one T20 international, but pulled out midway after the fourth ODI in Dharamsala.

Dwayne Bravo, who recently announced his retirement from international cricket, has blamed West Indies pull out of the tour of India in 2014 a result of the players dispute with the West Indies Players Association (WIPA) as the reason behind his decision. West Indies, then led by Bravo, arrived in India in 2014 to play three Tests, five ODIs and one T20 international, but pulled out midway through the tour after the fourth ODI in Dharamsala.

The reason was a growing impasse between players and the WIPA regarding pay, and the board communicated to the BCCI that it was left with no choice after a contracts fallout with the players. Bravo never played an ODI for West Indies since, and speaking to i955fm, a Trinidad-based radio station, the allrounder opened up on the pull-out of 2014.

“The only thing I would do differently is tape everyone. Record everyone who was in there,” Bravo said. “I’m the only player that really paid for what happened in India. The only one who never get the opportunity to play one-day cricket again. I made a stand, as the captain, as the leader of the team, for the best interest of my players, and by extension the players who have come and played for West Indies cricket. At the end of the day, it wasn’t fair on our bosses to send us on tour and cut the guys’ contract by 75 percent. It was just really unfair.”

Bravo went on to reveal that relations between WICB (now Cricket West Indies) and the players began turning sour in January, when Wavell Hinds, the then President of WIPA, suggested the implementation of a professional league system, which needed the players to undergo salary pay-cut. According to Bravo, he, and the seniors (Ramnaresh Sarwan, Shivnarine Chanderpaul) agreed to the proposal, but the new salary structure of the players was not presented to them yet. It was only in October, the month of the tour that the new figures were revealed which did not go down too well with the players.

“The next time we hear from WIPA, or see anything about our contract or new figures, was in October, when the team was already in India. When the team arrived in India – I was already there playing Champions League for Chennai Super Kings – couple of the players message me, ‘skipper, did you see the new contract?’ I said, no. When you look at it, you see, straight across the board, the players’ salary was cut by 75 percent. That’s where it really, really happened, where everything broke down. I straightaway get on to Wavell Hinds. He says: ‘Bravo, tell the players do not sign the contract, it’s not still cast in stone, do not sign the contract,'” added Bravo.

Bravo further revealed that West Indies were due to fly out before the first ODI itself, but a text message from N Srinivasan, the-then President of the BCCI requesting them to go ahead with the game, made Bravo and Co. change their minds.

“I remember fully well before we said we weren’t going to play the first game, 3 am in the morning, I get a message from the BCCI boss, the old one, Mr [N] Srinivasan, that ‘please take the field.’ I listened to him – and woke up at 6 am to tell the team that we have to play. And everyone was against playing. Everyone thought that I panicked and chickened out and all these things, Bravo said.

“But I was more concerned about the players’ future more than anything else, because it was a serious decision to not play and walk away from the tour. All of us could have been banned for life. So by taking the opportunity and listening to the bosses of BCCI, that was one way to ensure that we are protected.”

West Indies beat India in the first ODI and lost the next game in Delhi. The third game in Vizag was cancelled due to a storm before the Windies travelled to the quaint hills of Dharamsala. Bravo went on to add that he and the team were not in favour of pulling out, for it would reflect West Indies in poor light. But Bravo’s plea continued falling on deaf ears which eventually left them no choice but to abandon the tour.

“Collectively as a team, we decided what to do. I listened to every single player. Apart from one player, everyone signed on a piece of paper, that they were all in support of leaving the tour,” Bravo said. “But we did not just decide to walk away from the tour. There were different times when we tried to reach out to both our WIPA president [Wavell Hinds] and the cricket president [Dave Cameron, Cricket West Indies president]. 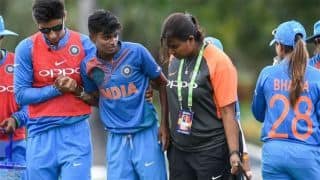