Sri Lanka annihilated England by 10 wicket to sail into the World Cup semfinals. The Lankans rode on an unbeaten double-century opening stand between Upul Tharanga and Tillakaratne Dilshan to finish at 231 for no loss in 39.3 overs. Both Tharanga and Dilshan belted strokeful hundreds. 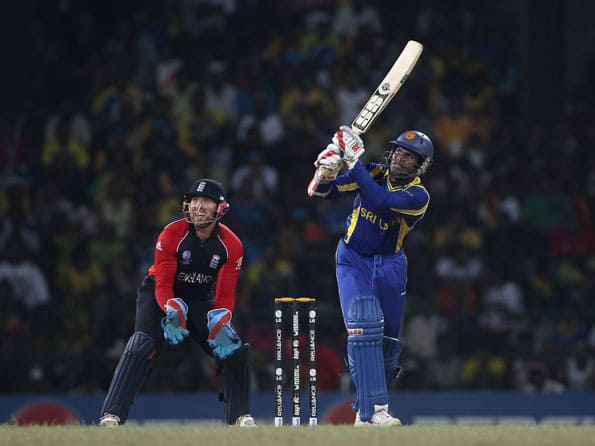 Tillakaratne Dilshan slammed his 22nd one-day international half-century as he and Upul Tharanga forged a rollicking century opening stand in pursuit of 230 for victory in their World Cup quarter-final match against England at the R Premadasa Stadium at Colombo.

Dilshan brought up his fifty with a single off Tim Bresnan and soon it was his opening partner Tharanga s turn to reach his 20th one-day international half-century as Sri Lanka set their 230-run chase on a robust footing at the halfway mark.

Tillakaratne Dilshan unsettled the England bowlers with crafty strokeplay on both sides of the wicket. A thump off Graeme Swann through the covers got him going.

He ensured Ravi Bopara s introduction to the bowling attack was an inauspicious one Dilshan biffing the bowler towards the backward point boundary off his first ball.

The right-hander then singled out Chris Tremlett in the next over first hammering him through the covers before fiercely cutting a short one to the point boundary to bring up the Sri Lankan fifty.

He banged James Tredwell over long-on for his first six to keep the Sri Lankan chase on a firm footing.

But it was Dilshan s opening partner Upul Tharanga, who was quickly off the blocks.

The left-hander sent the home crowd into frenzy, cutting Bresnan past point for the first boundary in the third over before stepping out to Swann and hoisting him over his head for the first six of the game.

Earlier, England opened with the seam-spin combination of Tim Bresnan and Graeme Swann but the move didn t yield any early success.

Strauss kept shuffling the bowlers he replaced the Bresnan-Swann bowling duo with Chris Tremlett and Ravi Bopara before tossing the ball to James Tredwell and Luke Wright but England struggled to produce the much needed breakthrough.

Ponting's future in hands of selectors