Saeed Ajmal was also overlooked after failing to impress since returning earlier with a remodelled action from a ban.

Rookie paceman Imran Khan junior was Wednesday rewarded for his excellent bowling in Pakistani domestic cricket with a first-time inclusion in the national Twenty20 squad for the tour of Zimbabwe. The 27-year-old took 16 wickets to help Peshawar defend the National Twenty20 title in Rawalpindi on Tuesday, claiming his second successive best bowler award after also winning it in 2014. “We have rewarded some outstanding performers in the recently concluded tournament and Imran was one of them,” chief selector Haroon Rasheed said in a Pakistan Cricket Board (PCB) release. ALSO READ: Pakistan announce Test squad for three-Test series against England

The 25-year-old uncapped pace bowling all-rounder Amir Yamin was also included for the two Twenty20 matches in Harare on September 27 and 29. Shahid Afridi will lead the Twenty20 side while Azhar Ali will be the skipper for the three one-day matches on October 1, 3 and 5 — all in Harare. Veteran batsman Younis Khan was not selected after a poor run of scores in the World Cup in Australia and New Zealand in February-March this year. ALSO READ: Pakistan announce squad for limited-overs away series against Zimbabwe

Another senior member, spinner Saeed Ajmal, was also overlooked after failing to impress since returning earlier with a remodelled action from a ban. Ajmal’s action was reported as suspect in August last year and he was subsequently suspended. He was cleared to bowl again in February this year but had a poor limited-overs series in Bangladesh earlier this year and was dropped. Batsman Sohaib Maqsood returned to both squads after injuring his arm before the tour of Bangladesh. 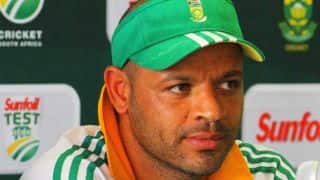