Cricket hero turned politician Imran Khan ramped up the anti-corruption message at a rally of over 100,000 people in Pakistan on Sunday, boosting his image as a rising political force. 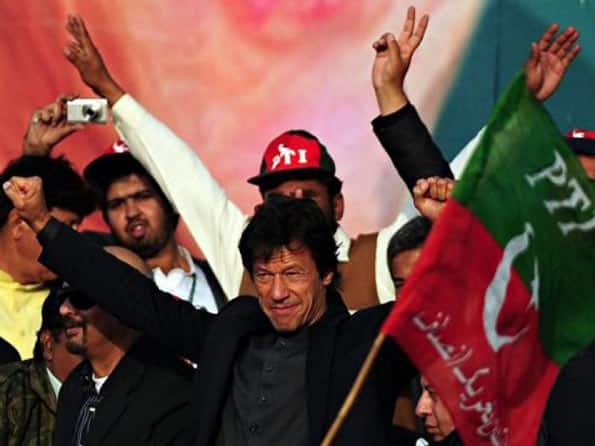 Cricket hero turned politician Imran Khan ramped up the anti-corruption message at a rally of over 100,000 people in Pakistan on Sunday, boosting his image as a rising political force.

All roads in the port city of Karachi near the rally venue were jammed for more than ten hours, an AFP reporter said, and hundreds of thousands of people waved party flags when the former Pakistan cricket captain arrived.

“I promised to all you people that we’ll make a new and respectable Pakistan. Join me to achieve this goal,” he told the crowds, full of people waving the green and red flags of his opposition Movement for Justice Party.

“I have been an honest cricketer who never fixed a match. I promise you that I’ll never fixed a match either during my political career,” he said, brushing aside speculation his rise had tacit support from the military establishment.

“Once we are in power, we’ll end corruption in 90 days. My party has zero tolerance for corruption and corrupt people,” he said, calling his campaign “a good tsunami that will destroy injustice and corruption”.

The 59-year-old who guided his country to a World Cup win in 1992, entered politics after founding his Movement for Justice Party in 1996.

He has started campaigning against the ruling Pakistan Peoples Party in government and is also critical of the opposition party Pakistan Muslim League led by former prime minister Nawaz Sharif.

Khan, who drew more than 100,000 people to his October 30 rally in Lahore, brimmed with confidence that he could solve the problems in Pakistan, plagued by terror attacks, corruption, a weak economy and power and gas outages.

His party has tapped social media, including Facebook and Twitter, to reach the all-important 18-30 age group which represents about one-quarter of Pakistan’s population of 174 million — and more than the usual voting pool.

Nearly 600,000 people have joined Khan’s party in recent months by sending a text on their mobile phone.

“We have estimated that more than 100,000 people have been gathered,” Javed Odho, a senior police official at the event told AFP.

Khan, who cemented his national profile in 1992 when he captained the only Pakistani cricket team to clinch the World Cup, is pushing an anti-graft revolution, and some politicians have already defected to join his camp.

The latest defection came on Saturday, as prominent politician Javed Hashmi broke with the Pakistan Muslim League to join Khan, and raised alarm bells in both ruling and opposition parties.

Khan’s supporters said they believed he could turn the country around.

“We see a ray of hope in him. He seems to me an honest man, which is rarity in Pakistan. I hope he makes our country respectable in the world,” 19-year-old university student Tashfeen Ash’ar said, her face painted in party colours.

Khan told the crowd he was forming a team to formulate policies, notably aimed at alleviating poverty “We want to break the begging bowl once and for all”, he said, and make Pakistan a “true Islamic welfare state”.

He hit out at Pakistan’s President Asif Zardari, claiming his days were numbered and accusing him of policies that encouraged corruption, and which cost Pakistan three billion rupees ($34 million) a day.

Political analysts said Khan’s rally was impressive but it could impact politically on Pashtun voters in Karachi whose more than 2.5 million population migrated from the northwest for better job prospects.

“The majority of people who participated in the rally were Pashtuns, which shows they can vote for Imran Khan at the cost of religious and political parties they have been voting so far,” analyst Tauseef Ahmed Khan told AFP.

Karachi, with a population of 18 million, is gateway to the Arabian Sea and provides the bulk of the democratically fragile country’s income.(AFP)