South Africa won by 62 runs against in the ICC Cricket World Cup 2015, Pool B.

Imran Tahir picked up three wickets as Zimbabwe were unable to chase down the huge target of 340. South Africa won by 62 runs against Zimbabwe in the ICC Cricket World Cup 2015, Pool B at Seddon Park, Hamilton on Sunday. Feeling the pressure towards the end of the match, Zimbabwe lost quick wickets. Live Updates: South Africa vs Zimbabwe Pool B game at Hamilton.

Despite positive partnerships during the Zimbabwean innings, the Elton Chigumbura-led side was not able to hold on to the momentum as Zimbabwe kept on losing wickets at regular interval. Zimbabwe lost their last five wickets within a span of seven overs. ICC Cricket World Cup 2015: SCHEDULE & MATCH DETAILS

After Chibhabha was dismissed, Masakadza stuck in the middle with Brendan Taylor for some time, before the latter was removed by Morne Morkel for 40. He smashed four fours and one sixes in his 40-ball innings. ICC Cricket World Cup 2015: POINTS TABLE

Vernon Philander and Morne Morkel picked up two wickets each and JP Duminy, who scored a century earlier, picked up one wicket. South Africa’s famed bowling line-up took some time to get into the groove and restrict Zimbabwe. Much feared South African pacer Dale Steyn picked up only one wicket of Craig Ervine.

At the brisk end of the Zimbabwe innings, Solomon Mire tried to put up a positive act, as he scored 27 off 25 balls, which included two fours and two sixes.

Zimbabwe lost Sikandar Raza early in the match, as he was bowled by Philander for five runs. ICC Cricket World Cup 2015: Complete Coverage

Earlier, South Africa recovered from dubious position to post a challenging total of 339 for the loss of four wickets against Zimbabwe. David Miller and Duminy posted their second and fourth One-Day International (ODI) centuries respectively. Miller, who was unbeaten on 138, also hit the most number of sixes in World Cup history. Duminy and Miller’s partnership marks the new highest fifth-wicket partnership. Their unbeaten 256-run overtook Eoin Morgan and Ravi Bopara’s previous record against Ireland at Dublin.

South Africa lost four wickets when the score was 89. All top four batsmen, including AB de Villiers, were dismissed cheaply. Zimbabwean bowlers produced disciplined bowling in the initial overs of the South African innings. However, they were not able to keep the momentum, as Miller and Duminy wreck havoc. Read South Africa vs Zimbabwe ICC World Cup 2015 innings reports here.

Tendai Chatara and Tinashe Panyangara were the only bowlers to complete their 10 overs quota. Despite starting on a good note, Zimbabwe were not able to hold on to the momentum. Tadazwa Kamungozi was the most economical bowler, and he picked up the prized wicket of de Villiers. Chatara, Panyangara, Kamungozi and Chigumbura shared one wicket each.

Man of the match: David Miller. 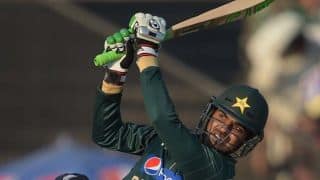