A photo collage of the second day's play at Edgaston between India and England.

India needed four deliveries on the second morning of the Edgbaston Test to take the tenth England wicket, with Mohammed Shami dismissing Sam Curran for 24. England added two runs to their overnight score and were bowled out for 287. Shami finished with 3/64. From a position of security, however, the India unraveled in a hurry with Curran, in his just his second Test match, taking three wickets in one spell.

SCORECARD | DAY 2: AS IT HAPPENED

India’s captain, Virat Kohli, was the only batsman to cross 26 and his sparkling 149 – his first Test century in England – helped India go from 182/8 to 274. In 3.4 overs before stumps, R Ashwin bowled Alastair Cook and England ended the day on 9/1.

Recap the second day s action through this seres of photos.

Mohammed Shami needed four deliveries to take the final England wicket. The hosts were all out for 287. Sam Curran was last out for 24.

Sam Curran struck the first blow when he had Murali Vijay lbw for 20.

Two balls later, Curran had his second wicket when KL Rahul dragged a wide ball onto the stumps.

Ben Stokes got into the action during the second session when he had Ajinkya Rahane (15) caught at third slip by Keaton Jennings.

Then Stokes knocked Dinesh Karthik s middle stump out of the ground for his 100th Test wicket.

Virat Kohli was dropped on 21 and 51 by Dawid Malan and used the chances to produce a battling half-century.

Even as wickets continued to fall, Kohli batted on a different level and managed to farm the strike and find the boundaries.

Kohli reached his first century in a Test in England in the company of India’s No 11, Umesh Yadav.

R Ashwin capped the day by bowling Alastair Cook for 0 – the ninth time he has dismissed him in Tests – and England ended on 9/1. 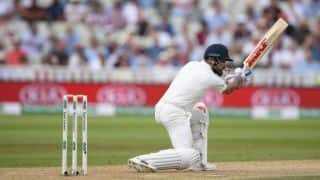