A photo collage of the third day's play at Lord's between India and England.

England’s quest for a big lead at Lord’s was dented significantly by India’s trio of fast bowlers, who by lunch had reduced the home team to 89/4, but a record sixth-wicket partnership between Jonny Bairstow and Chris Woakes took the game away from India.

After being bowled out for 107 on day two, India needed wickets and they got four of them through Ishant Sharma, Mohammed Shami and Hardik Pandya in the first session on Saturday. However, despite losing a fifth during the afternoon, England were driven forward by Bairstow and Woakes.

Here’s how day three has played out so far:

After an opening stand of 28, the first wicket to fall was Keaton Jennings in the eighth over for 11. It was a plumb lbw, and why the decision was reviewed only the batsman could possibly answer.

Ishant Sharma struck next, getting Alastair Cook with a good delivery. Cook made 21, and England were 32/2.

Ollie Pope’s debut innings came to an end on 28 when he was lbw to his 38th delivery. A review was called for but the decision remained, giving Hardik Pandya his first wicket.

Worse was to follow for England, as skipper Joe Root was trapped lbw for 19 from 53 balls by Shami. With no reviews left, Root had to walk off, with England 89/4.

With the lead at 24 runs, England lost Jos Buttler when he shuffled across his crease and missed a flick against Shami.

Jonny Bairstow became the first batsman in this Test to get to 30, and crucially converted it into a half-century as England’s lead crossed 100.

Chris Woakes, back in the XI in place of Ben Stokes, raised his fifty from 71 balls.

From there, it didn’t take long for the allrounder to get to his maiden Test century, off 129 balls.

The stand between Bairstow (93) and Woakes is the highest sixth-wicket stand for England versus India. 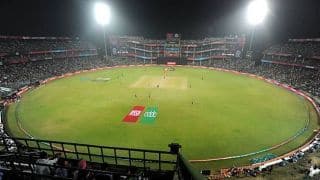