In Pictures: Scotland vs England

In Pictures: Scotland vs England

Just a day before the match Eoin Morgan had said about Scotland being extremely competitive and Scotland did prove him right. Scotland have created history by defeating England in ODI by 6 runs. Scotland posted a huge total of 371 after being asked to bat. The openers gave a good start to the host and then it was Calum MacLeod ‘s show from then on. MacLeod scored 140* off 94 which included 16 fours and 3 sixes. Apart from him Kyle Coetzer (58) and George Munsey (55) also recorded half-centuries. Adil Rashid and Liam Plunkett shared four wickets among themselves.

England started the chase well with Jonny Bairstow (105) bringing up his third consecutive century. Alex Hales (52) also got up his half-century but could not convert it to something big. Moeen Ali (46) and Plunkett (47*) fought hard but failed to take their team home. Mark Watt starred with the ball picking up 3 for 55. 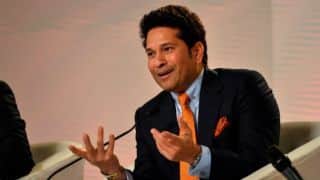 Find out how Sachin Tendulkar spends time after retirement