Most of the senior players are likely to be available for the tour.

Cricket West Indies (CWI) has revealed the schedule for India’s tour of the West Indies. The tour comprises three ODIs and five T20Is. The tour kicks off with the ODI leg on July 22, with the remaining two ODIs scheduled on July 24 and 27. All matches will be played at Queens Park Oval in Port of Spain.

The T20Is will start on July 29, with matches to follow on August 1, 2, 6 and 7. Most of the regulars are likely to go on the tour. Senior players like Virat Kohli, Rohit Sharma, Jasprit Bumrah and Mohammed Shami have been rested from the upcoming series against SA, but will board the flight to the UK for the England series. With some rest before the tour, the players will not be too exhausted for the West Indies series.

Speaking about the South Africa series, the teams will clash in five T20Is, starting June 9. Post the series, the Indian team will depart for the UK for an all-format series against England. The team will play one Test, which will be the part of the postponed series that India leads 2-1, three ODIs and as many T20Is. The England tour will end on July 17 and the team is likely to leave for West Indies directly from England. 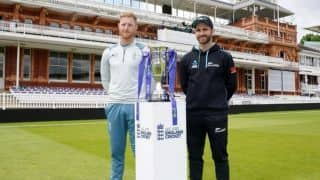