Shardul Thakur revealed the plan the team had to bowl to Smith, who he had caught down the leg-side by wicketkeeper KL Rahul. Team India seamer Shardul Thakur emphasized on his plans he executed with the ball in the third ODI against Australia in Canberra on Wednesday. The Men in Blues beat Australia in the last ODI by 13 runs, where Shardul played a monumental role with the ball by picking three wickets for 51 runs.

Thakur stuck to tight length and troubled the Aussie batsmen as he also got the prized wicket of Steve Smith who scored centuries in the first two matches of series. The 29-year-old was playing his first match of the series as he came in as the replacement of Mohammed Shami, who got the rest for the dead-rubber.

The Mumbaikar said his plan was to make the Aussie batsmen play straighter lines, which eventually worked in his favour.

“The plan was to bowl length consistently. They had scored a lot of runs through cuts and pulls in the first two games, so I decided to make them play straighter lines. That worked,” said Thakur while speaking to the media after the match.

Thakur also revealed the plan the team had to bowl to Smith, who he had caught down the leg-side by wicketkeeper KL Rahul in what he admitted was a lucky dismissal.

“I feel sometimes we get lucky. Wanted his wicket to put them on the backfoot. I had planned bowling at his stumps and he edged down the leg side. Getting him early while defending 302 was big. The win gave us the momentum to go into the T20I series,” added Thakur.

The fast-bowler also talked about the use variations on the pitches which are good to bat. 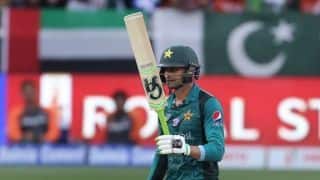 No Communication From Selectors: Shoaib Malik on Being Dropped From NZ Tour