Kohli and Rohit's frustration and puzzled expressions were caught on camera as the two continued to signal Pant-Ishant to have a word with the umpires about the bad light.

London: IND vs ENG 2nd Test – India captain Virat Kohli and opener Rohit Sharma’s reaction from the iconic Lord’s Balcony grabbed the limelight on day 4 of the second Test. As the light started to fade and it went dark at the Home of Cricket on Sunday- Kohli and Rohit started looking animated at the dressing room. Both the senior players looked annoyed and puzzled while signalling Rishabh Pant-Ishant Sharma to have a word with the umpires’ light quality degrade at Lord’s.

However, the on-field umpires continued with play as spinner Moeen Ali and England skipper Joe Root operated in tandem. Moeen got rid of the well-set Ajinkya Rahane (61) and Ravindra Jadeja (3) in quick succession to dent India’s hopes of a considerate lead in the second Test. Angry with the decision of continuing in bad light, Rohit and Kohli’s reaction was caught on camera from the Lord’s balcony.

Virat Kohli complaining about the light from Lords balcony, Rohit Sharma joining him by scolding Pant for not taking it to the umpires.

Meanwhile, in the second Test, the seasoned duo of Cheteshwar Pujara and Ajinkya Rahane found much-needed runs from their bats to rescue India from a perilous position and give their team a fighting chance in the second Test against England.

With their in-form openers and skipper Virat Kohli back in the hut at 55 for three and India effectively ahead by only 28 runs, the visitors stared at a batting collapse considering the prolonged struggles of the middle-order and their long tail.

When bad light forced early stumps on day four, India reached 181 for six, leading England by 154 runs. Rishabh Pant (14 batting off 29) will need some support from the long Indian tail to add some valuable runs on the fifth morning.

With the pitch already playing a few tricks, England will have to bat extremely well to secure victory. 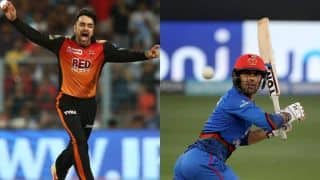