Bindra was unanimously elected as the Chairman at the election of PCA office bearers in Mohali on Sunday.

Chandigarh: Veteran cricket administrator Inderjit Singh Bindra was unanimously elected as Chairman of the Punjab Cricket Association (PCA) at the election of office bearers of the PCA held in Mohali on Sunday. Besides 71-year-old Bindra, the other office bearers of the PCA who were unanimously elected in the election process which was taken up after the 67th Annual General Body meeting held at the PCA stadium, are D P Reddy as PCA President, M P Pandove as Secretary General, G S Walia as Secretary, Viswajeet Khanna as treasurer and Sumedh Singh Saini (Punjab DGP) and B K Mehta as Vice Presidents.

The AGM was held at Dhruv Pandove Conference Hall of the PCA stadium, which has been recently named after I S Bindra. The meeting was presided over by D P Reddy, who had in August last year taken over as President of the PCA from Bindra. Pandove initiated the discussion on the agenda, PCA spokesperson Sushil Kapoor said. Kapoor said that the House congratulated the new office bearers on their unanimous elections.

After the elections, the annual awards were presented. Among those to receive the awards included two senior life members Onkar Nath Aggarwal from Jalandhar and K M Saxena from Patiala, who were honoured with a shawl and a silver salver by Bindra.

Bindra was in the news recently for his views on the Indian Premier League (IPL) verdict delivered by the Supreme Court-appointed Lodha Panel, which suspended leading franchises Chennai Super Kings (CSK) and Rajasthan Royals (RR), as well as placed bans on Gurunath Meiyappan and Raj Kundra, both of whom were accused of involvement in betting and other forms of corruption. Bindra described the verdict as “historic and landmark”. Read more on IPL Verdict 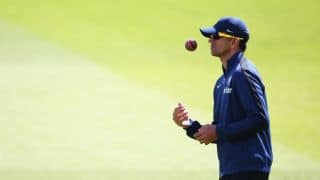