With an aim to create a solid bench strength, India 'A' take on Australia 'A' in the first unofficial Test.

Chennai: With an aim to create a solid bench strength, Rahul Dravid-coached India ‘A’ would take on Australia ‘A’ in the first unofficial cricket Test of the two-match series. India ‘A’ under its new coach Dravid would embark on a new mission to create a wider pool of cricketers for the country. Tours of ‘A’ teams gained emphasis under the Anil Kumble-led current Technical Committee of the Cricket Board (BCCI) as these matches will help in spotting the next generation of players for the national senior team. Just after taking charge of the ‘A’ team, Dravid has laid emphasis on the bowlers’ ability to take 20 wickets and batsmen intent to stay longer period of time at the wicket.

India ‘A’ will be lead by top-order batsman Cheteshwar Pujara, who will be eager to return among runs and earn his place back in the senior Test side. Pujara, who fell out of favour after struggling in England and Australia and was dropped from the recent Bangladesh squad, is keen for big scores. The Saurashtra run-machine, who had earlier led the ‘A’ teams against South Africa (away) and against the West Indies in 2013, would be desperately looking forward to the series to prove his detractors wrong. The four-day matches Australia ‘A’ would also give Pujara an opportunity to showcase his captaincy skills.

The Indian team has mixture of experienced and and young players, who would be looking forward to make a mark for themselves on home conditions. Apart from Pujara, the unofficial Test series would be an ideal platform for the likes of KL Rahul, Abhinav Mukund and spinners Amit Mishra and Pragyan Ojha to prove their worth, while new ball bowler Umesh Yadav would be hoping to cement their places in the senior side after having struggled in the recent tours.

Another new ball bowler Varun Aaron, who too was looking at the series to cement his place in the senior side, has been ruled out of the first match because of viral fever. To India’s advantage, the home team players have played more number of competitive matches in the domestic scene compared to the Aussies. Going by the team strengths, India has a balanced side. While the top-order looks solid, India’s pace attack has variety in the form of Yadav and Abhimanyu Mithun but Aaron’s absence might be felt by the hosts. The spin department will be spearheaded by leg-spinner Amit Mishra in the company of left-arm spinner Ojha.

On the batting front, Rahul, in particular would be itching to make runs against a formidable Australian bowling attack, especially after having missed the Bangladesh tour due to illness. Besides there players like Mukund, Vijay Shankar and Baba Aparajith who have shown their potential with the bat in domestic matches and would like to translate that at the international stage.

Shankar, in fact, is the only all-rounder in the team and would be keenly observed by the selectors after he made a mark for himself in the domestic season. Local lad Shankar, a new ball bowler, is familiar with the conditions at Chepauk and is also capable of bowling long spells. But Pujara and Co would be wary of their opponents led by Usman Khawaja. Khawaja had recently underwent a left knee reconstruction surgery and would like to make good use of this opportunity to get back to the Australian side.

Khawaja last played a Test for Australia during the 2013 Ashes tour. He had been in fine form for Queensland scoring 523 runs at a strike rate of 74.71, including a top score of 166 last year before the injury. Besides Khwaja, Joe Burns, wicket-keeper batsman Matthew Wade, Nic Maddinson and all-rounder Marcus Stoinis are also capable of putting the Indian attack in disarray. The Austrlaian side also has a formidable pace attack, which they always rely on. The series will also be a great opportunity for Australian spin duo of Ashton Agar and Steven O’Keefe to test their skills on friendly subcontinent tracks. 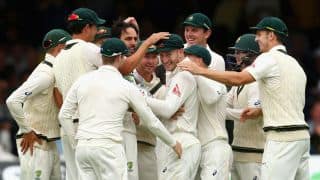 20 international cricketers and their love for dogs