India A had defeated the Vijay Hazare Trophy winners Gujarat in their last match to qualify for the final at Kanpur.

Batsman Faiz Fazal and bowler Sreenath Aravind helped their side India A to lift the prestigious Deodhar Trophy 2015-16 as they won against India B by a massive 87 runs in the final match at Kanpur. India B had won both their initial matches to qualify for the final while India A defeated the Vijay Hazare Trophy winners Gujarat in their last match to qualify for the final at Kanpur. The teams collided in the final match that saw a terrific performance from the India A team with both bat and ball and the performance resulted in a comfortable win. Full Cricket Updates, Deodhar Trophy 2015-16, Final at Kanpur

India A won the toss and elected to bat. The openers, Faiz Fazal and Murali Vijay, got to a steady start. They didn’t score much in the initial overs as they had only 10 runs on the board after 5 overs. They gradually picked up the momentum and then there was no stopping them. Fazal went on to score a century off 116 balls with the help of 9 fours and 3 sixes while Murali Vijay at the other end went on to score 69 off 91 balls, hitting 3 fours and 3 sixes in the process. The Partnership added 162 runs. The next mentionable contribution came from Kedar Jadhav who came to bat down the order and scored a 39-ball 58. Jadhav hit 4 fours and 2 sixes during his quickfire innings and remained unbeaten to see his side post a total of 286 with the loss of 7 wickets in their 50 overs.

For India B, it was Dhawal Kulkarni who did the best with the ball. Kulkarni took 2 wickets, gave away 31 runs bowling one maiden over and finished with an economy of 3.10. Nathu Singh also got a couple of wickets while Stuart Binny and Baba Aparajith both got one wicket each.

Coming out to chase the runs, the India B top order collapsed in no time. They lost the wickets of Unmukt Chand, Mayank Agarwal and Shreyas Iyer within the first four overs which increased the pressure quite a lot. India B never properly revived as Only two batsmen managed to make a mark with their batting. Suryakumar Yadav provided some support scoring 45 while Stuart Binny kept the hopes alive for India scoring 60 off 73 deliveries. Another effort came from Karn Sharma, who hit three big sixes towards the end but could not save his side from a defeat.

For India A, Shahbaz Nadeem was the highest wicket taker for the side, with 3 wickets. Nadeem bowled two maiden overs and finished with an economy with 3.72. But the most crucial wickets were taken by Sreenath Aravind who finished with an economy of 3.55. Krishna Das and Shardul Thakur also picked up a couple of wickets each while Amit Mishra got a solitary wicket. 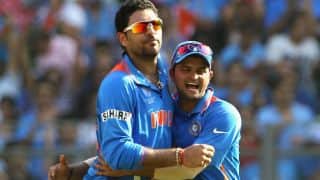