The Australian A pace duo of Chris Tremain and Daniel Worrall shared nine wickets between them to wreck India A 's batting line-up.

Townsville (Australia): The India A cricket team suffered a humiliating eight-wicket loss to Australia after being shot out for a mere 55 runs in the opening match of a quadrangular One-Day series today. Put in to bat, India’s innings folded in just 15.4 overs with only one batsman — Akshar Patel (15) — getting into double figures. The Australian pace duo of Chris Tremain and Daniel Worrall shared nine wickets between them to wreck India’s line-up before the local side sailed home in 17.1 overs losing just two wickets in the process. Full Cricket Scorecard: India vs West Indies, 3rd Test match

While Tremain knocked off 5/25 in 7 overs, Worrall picked up 4/26 in 7.4 overs. In a dismal batting performance, half the Indian team found itself back in the pavillion with just 22 runs on the board. But for Patel’s 15-run cameo, the score could have been even lower. In response, Australian opener Kurtis Patterson (23 not out) Marcus Stonis (19) ensured that the home team chased down the target easily. India A will play their second game against South Africa A on August 17.

Indian A team is currently touring Australia in for a quadrangular One-Day international (ODI) series. The tour will also consist of a couple of four-day games as well. The tour is started from August 13 and would continues until September 18. The side is led by Naman Ojha, and includes the likes of Shreyas Iyer, Karun Nair, Manish Pandey, Kedar Jadhav, Akshar Patel, Dhawal Kulkarni, Jaydev Unadkat, Barinder Sran, Varun Aaron and many other recent Indian debutants.

First Published on
Last updated on August 14, 2016 4:11 PM IST
TOPICS:
India A Australia A India A tour of Australia A 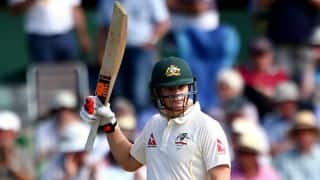