India A claim unofficial Test series against South Africa A

India A claim unofficial Test series against South Africa A

Akshar Patel's supreme figures of 4 for 0, helped India A win the second and final four-day match.

Krishnagiri (Kerala): An excellent bowling performance, highlighted by left-arm spinner Akshar Patel‘s supreme figures of 4 for 0, helped India A win the second and final four-day match by an innings and 81 runs at the Krishnagiri Stadium here on Friday and thus clinch the two-match series 1-0. In reply to visitor’s first innings score of 260, India declared at 417 for 8 in the second innings on the third and penultimate day and then bundled out South Africa A for just 76 runs in their second innings on Day 4 on Friday. South Africa A resumed fourth and final day’s play trailing by 157 runs in the second innings. But to their surprise, the hosts displayed some impressive show with the ball led by spinner Patel alongside Jayant Yadav (2/10), Karn Sharma (1 for 16), Baba Aparajith (1 for 17) and Shardul Thakur (1 for 20) to bowl out South Africa A for just 76 in 31.4 overs. India vs Sri Lanka 2015, 3rd Test at Colombo (SSC): Early tea taken as rain washes out second session

Stiaan van Zyl (10) and Quinton de Kock (20) were the only batsmen who made it to the double digit mark. Left-arm spinner Patel struck in the fourth over of the day’s play to remove South Africa A opener Reeza Hendricks (1) to put the visitors on the back foot. The visitors received a double blow in the 11th over when incoming batsmen Gihahn Cloete (4) too headed back to the pavilion putting South Africa A in trouble at 20/2. Akshar Patel’s spell rolls down South Africa A by an innings and 81 runs in 2nd unofficial Test at Wayanad

Van Zyl who made it to the two digit mark was cleaned bowled by Yadav to have the visitors reeling at 23 for 3 in the 14th over. With wickets falling in clusters, India skipper Ambati Rayudu put more pressure on the opposition bringing his in-form spinner Patel into the attack. The plan worked perfectly as fourth wicket went down in the 16th over to leave South Africa staring at defeat at 33 for 4. Mohammad Azharuddin to be honoured by Derbyshire

From there on, the hosts didn’t want to waste any time and looked to finish off the game as early as possible as Rayudu rotated his bowlers perfectly to bring down next five wickets of South Africa A in space of just 10 overs. Beuran Hendricks was declared absent hurt while Hardus Viljoen (9) remained unbeaten for the visitors. PHOTO: Sachin Tendulkar wishes everyone, “Happy Onam!” 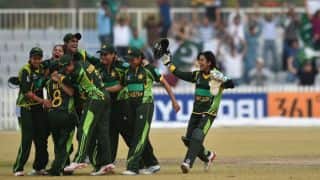 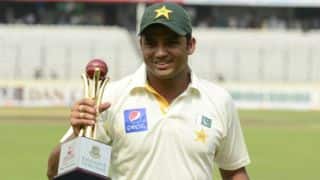