India A will aim to put up an even better performance and win against South Africa A.

Krishnagiri (Kerala): On a high after managing a memorable draw in the first match, India A will aim to put up an even better performance and win against South Africa A in their second and final four-day match at the Krishnagiri Cricket Stadium on Tuesday. Right-hand batsman Karun Nair struck an impressive century (114 not out) alongside Vijay Shankar’s unbeaten 74 to help the hosts to a draw against South Africa A on Friday in the first four-day match. But India A will miss in-form batsman Nair for their second match as he was called in by the senior Indian team as a replacement for injured batsman Murali Vijay for the third Test against hosts Sri Lanka.

India A played second fiddle to the visitors for the main part of the match but both their bowling and batting clicked when it mattered. They were bundled out for just 204 in the first innings, but some outstanding batting in the second innings saved the day for the Rahul Dravid coached India A side. With Nair unavailable, experienced Abhinav Mukund, skipper Ambati Rayudu, young Shreyas Iyer and Shankar will hold the key in the batting department.

Bowlers Ishwar Pandey, Akshar Patel, Karn Sharma and Abhimanyu Mithun, thought to be the stronger attack, were unimpressive in the first innings of the first match. The first game should be a learning experience for the bowlers who will look to bounce back with a much improved performance. On the other hand, South Africa A will have very little homework to do ahead of the second match when it comes to their batting.

In both the innings their batsmen were stand out performers. While their bowling clicked in the first innings, it failed to put pressure on the Indian batsmen on the final day, which resulted in a draw. The visitors’ batting will again depend on in-form batsman Quinton de Kock and Omphile Ramela, while right-arm spinner Dane Piedt will be the key in their bowling department. 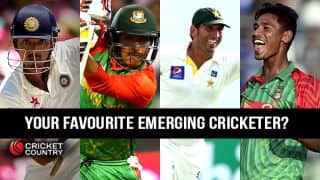 POLL: Who is the most impressive emerging cricketer at present?